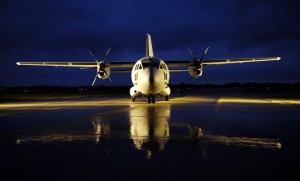 Alenia has been awarded a contract to support the RAAF's forthcoming C-27J fleet. (Alenia)

Just weeks after announcing the Alenia C-27J was selected for the Project AIR 8000 Phase 2 BFA requirement, Alenia Aermacchi has been awarded a contract to “allow for” the long-term operation, maintenance, modification and upgrade of the aircraft and its support systems.

“The contract, which is worth around $63 million, will also provide Defence with the ability to compete and sublicense third parties, including Australian industry, to provide the maintenance services, training services and the ability to modify the C-27J capability,” Defence Minister Stephen Smith and Defence Materiel Minister Jason Clare said in a June 3 statement.

Although Alenia builds the airframes in Italy, the systems installation work for the government-to-government FMS contract is done by L-3 at Greenville, Texas.