Together, the companies have agreed to set up a sovereign MRO framework to bolster local support for the Royal Australian Air Force (RAAF) platforms.

Components include the main and nose wheel hubs and a component from the environmental control system — currently repaired in the United States via the US Navy’s foreign military sale program.

The program manager went on to laud RUAG’s work in the MRO space, with the company recently securing accreditation to repair E-7A Wedgetail Air Cycle Machines.

“RUAG is a proven partner across many Boeing programs and we’re excited at the potential for the ACEAS contract and Wedgetail accreditation to bolster their presence in international supply chains,” Gray said.

According to RUAG Australia’s general manager Terry Miles, this latest contract would build on the 19-year industry partnership between the two companies.

“This is a significant achievement towards using in-country sovereign capability to support Boeing and the F/A-18F and EA-18G platforms for the Royal Australian Air Force,” Miles added.

The facility has been designed to hold up to double the previous spare parts inventory and is purportedly capable of 15 times more freight each day direct to Brisbane, bypassing Melbourne.

This is tipped to accelerate deliveries to the commercial, business, general aviation, helicopter, and defence markets. 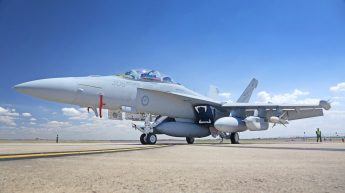