Rattlesnakes and scorpions have been sheltering around the wheels of Qantas’ A380s stored in the Victorville boneyard in California.

“The first thing we do before we unwrap and start any ground inspections of the landing gear in particular is to walk around the aircraft stomping our feet and tapping the wheels with a wheel whacker to wake up and scare off the snakes,” said Heywood.

He said the procedure ensures no harm comes to the snakes or the engineers before the wheels are unwrapped and staff complete pressure checks.

“It’s a unique part of looking after these aircraft while they’re in storage and it’s another sign of how strange the past year has been,” he said.

Last month, Australian Aviation revealed how the Qantas A380 that left the Victorville boneyard to fly to LAX did so for maintenance.

The last of the business’ A380s flew to the Californian desert boneyard in September but chief executive Alan Joyce has repeatedly said he believes his airline will reactivate its entire fleet of 12 A380s when the pandemic subsides.

In April, he said each aircraft could potentially come back into service in as little as “three to six months”.

Speaking to the CAPA Centre for Aviation, Joyce said, “We have luckily enough been replacing the bigger aircraft with the 787 … and the 787 is such a good aircraft. It can replace entire A380s, 747s in terms of range [and] costs are even better than an A380.”

Joyce’s vote of confidence in Airbus’ flagship comes after he said in February that it was “heartbreaking” to see the fleet stored in the Mojave Desert and insisted that curfews and expensive airport slots meant flying them will still be profitable.

“We have reconfigured six of them with brand new product onboards. In fact, one aircraft just being reconfigured flew directly to the Mojave Desert,” said Joyce at the time.

“It’s there with new seats on it and that nobody’s ever sat on, which is unbelievably disappointing. But we do think if you look at the Qantas’ network, there are going to be opportunities to deploy those aircraft.

“We do have scheduling windows, because if you if you’ve ever been in LA, at between 10 o’clock and midnight, you see six or seven Qantas aircraft departing to Australia, because it’s the only time that works with curfews, so instead of flying multiple frequencies right on top of each other.

“And eventually, over time, hopefully, we’ll have enough of the 350 aircraft to fly direct and overflow a lot of hubs as well. And that will take the burden of having the big aircraft needed for those big destinations.”

Joyce was referencing the A350-1000s the airline hopes to purchase in order to fly ‘Project Sunrise’ routes between London and New York to Sydney and Melbourne.

The final A380 to depart to the desert was VH-OQI msn 055, which departed the Dresden maintenance facility in Germany as flight QF6006 at 10:36am on 25 September 2020. It landed at the Victorville, California, facility 11 hours later.

In June 2020, the Qantas Group announced it would ground 100 aircraft for up to 12 months, including most of its international fleet.

The business said then there was “significant uncertainty” as to when flying levels will support the return of the A380, and revealed it would defer deliveries of A321neo and 787-9.

“As a result, the carrying value of the A380 fleet, spare engines and spare parts will be written down to their fair value,” Qantas said.

The six that are being refurbished are being upgraded with new business class seats and inflight lounges, and are likely to be among the first to come back when the A380 finally returns. 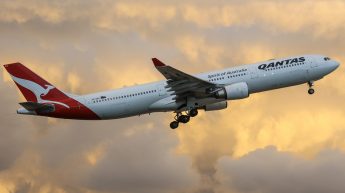