Fiji Airways will be the second airline to fly the Boeing 737 MAX to Australia from December when it deploys the aircraft on the Adelaide-Nadi route.

Currently, Fiji Airways flies twice a week between Adelaide and Nadi with Boeing 737-800s, having started the route in June 2017.

“We’re thrilled at how successful the direct route from Adelaide has been, and the number of South Australians we are now welcoming to our beautiful home – Fiji,” Fiji Airways executive general manager of corporate affairs Shaenaz Voss said in a statement on Friday.

“To celebrate a year of flying to this great destination, we’re delighted to announce that Adelaide Airport will be the first in the region to see our brand new Boeing 737 MAX 8 aircraft from December onwards.”

No specific start date was announced.

The first Fiji Airways Boeing 737 MAX 8s was due to arrive in November, with all five of the type on order expected to be delivered by the middle of 2019. The aircraft are slated to replace its existing narrowbody fleet of four 737-800s and one 737-700 that are used on short- and medium-haul routes to Australia, New Zealand, Hawaii, Kiribati, Samoa, Solomon Islands, Tonga and Vanuatu.

Fiji Airways chief executive Andre Viljoen said at the time the order was announced in November 2016 the five 737 MAXes would be delivered via a 12-year sale-and-leaseback financing arrangement as part of a package deal with GE Capital Aviation Services (GECAS), Boeing and engine manufacturer CFM International.

Adelaide Airport managing director Mark Young said strong forward bookings was an important factor for the decision to upgrade the route to the 737 MAX.

“I think customers will really notice the difference with the significantly upgraded Boeing 737 MAX 8s,” Young said in a statement.

“This aircraft is seen as a game changer in aviation since its launch in 2017. It’s significantly quieter – both internally and externally – it’s more fuel efficient, and has a greater range. Customers will notice a significantly upgraded interior with more space and LED lighting.”

In addition to linking Adelaide with the popular tourist destination of Fiji, the flight also offers South Australians a one-stop option to Honolulu, Los Angeles and San Francisco via Fiji Airways Nadi hub.

Aviation thinktank CAPA – Centre for Aviation said in a research note published in March 2018 Fiji Airways’ 737 MAX 8s would have 185 seats, which represented a 13 per cent increase in seat capacity compared with the 164-seat 737-800s currently flying.

“The MAX 8s will enable the airline to increase capacity on several of its short and medium haul routes,” the CAPA research note said.

“Fiji Airways has an important role in driving growth for Fiji’s tourism industry and it also has the ability to increase sixth freedom traffic.

Currently, Fiji Airways is utilising all 6,500 seats of available capacity for Fijian carriers to the four gateways of Brisbane, Melbourne, Perth and Sydney under the Australia-Fiji air services agreement.

However, there are no capacity restrictions for flights to Adelaide and cities other than the above four major international gateways under the bilateral.

Singapore Airlines’ regional wing Silkair was the first airline to operate the 737 MAX to Australia when started operating the type to Cairns and Darwin in January 2018.

There are two other Boeing 737 MAX customers in Oceania. Virgin Australia has 40 of the type on order, with first delivery due at the end of calendar 2019, while Air Niugini was expected to take the first of four MAX aircraft from 2020.

It was announced in June that Fiji Airways would be the first airline join the oneworld marketing alliance under a new “oneworld connect” category.

The new category allowed airlines that wished to join the alliance but did not have either the resources, or need, to offer full reciprocity of frequent flyer benefits and integration with the rest of the full oneworld membership the opportunity to do so.

VIDEO: A look at the inaugural Fiji Airways service to Adelaide in June 2017, from Adelaide Airport’s Facebook page. 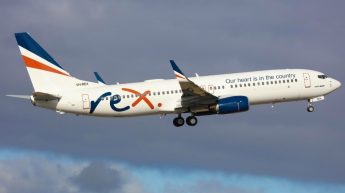