Silkair’s inaugural MAX service, operated by 9V-MBC, covered the 1,804nm journey between Singapore and Darwin in a little over four and a half hours.

The flight received an Airservices Aviation Rescue and Fire Fighting (ARFF) monitor cross on its way to the terminal, where there were some celebrations and an official welcoming ceremony.

The aircraft was on the ground for about 80 minutes before taking off as the reciprocal MI802 back to Singapore. The airline will celebrate six years of operating to Australia in March 2018, having started services to Darwin on March 26 2012.

In May 2015, SilkAir added Cairns to its network. The North Queensland city was Australia’s second destination to receive scheduled 737 MAX passenger service on Monday, when Silkair flight MI811, also operated by 9V-MBC, touched down a little after 1000 local time after a near seven-hour journey from Singapore. “We are thrilled to be welcoming the new Boeing 737 MAX 8 to the SilkAir family,” Silkair chief executive Foo Chai Woo said in a statement on Monday.

“The new MAX 8 enables us to offer customers access to new and exciting destinations and paves the way for a new phase of growth. With the aircraft entering into service, we look forward to inviting customers on-board to enjoy the quality experience that the MAX 8 offers.” Silkair took delivery of its first 737 MAX 8 in October 2017. The aircraft is configured with 12 business and 144 economy seats for a total of 156 and features an updated business class cabin with a seat pitch of 49 inches (up from 39 inches on the 737-800) and USB and plug-in charging ports.

Meanwhile, economy seats have a seat-back tablet or mobile phone holder, as well as USB charging ports, to allow passengers to more comfortably view the in-flight entertainment available to be streamed to personal electronic devices.

The switch to the 737 MAX 8 represents a slight capacity decrease in economy seats to Cairns and Darwin, given the Boeing 737-800s used previously on the two routes have 150 seats in economy. However, business class capacity is unchanged at 12 seats, albeit with an improved on-board product.

Cairns and Darwin are among five Silkair destinations served with the next-generation aircraft so far alongside Bengaluru, Hiroshima and Hyderabad.

The airline is transitioning to an all-Boeing fleet, with Airbus A319s and A320s being retired in favour of 737-800s and 737 MAX equipment.

SilkAir’s Cairns and Darwin services, like Singapore Airlines’ flights to Adelaide, Brisbane, Canberra, Melbourne, Perth and Sydney, are supported by the alliance with Virgin Australia, which places its VA airline code on all Singapore Airlines and SilkAir flights out of Australia, as well as throughout the pair’s Asian and European services.

Bureau of Infrastructure, Transport and Regional Economics (BITRE) figures show SilkAir carried 44,326 inbound passengers to Australia for the 12 months to June 30 2017, up 17 per cent from the prior corresponding period. The 2016/17 average load factor for its flights to Cairns and Darwin was 69.6 per cent.

And in an indication of the airline’s expansion in this market, SilkAir operated 394 flights in 2016/17, a 24 per cent increase from 317 flights the prior year. A look at the economy cabin on board Silkair’s Boeing 737 MAX 8 9V-MBC. (Sid Mitchell) Airline and airport representatives celebrate the arrival of flight MI801 on the tarmac. (Sid Mitchell) 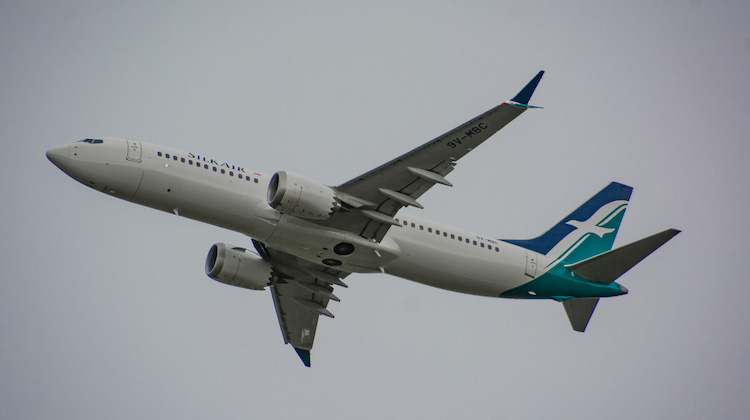 Does anyone know if Jetstar fly DRW to SIN?

Qantas would be stupid not to buy the MAX. It’s just common sense. Does anyone know when they will select the winner for Project Sunrise?

AT 49In Pitch for Business Class, Why don’t they put in lay-flat seats like FlyDubai did? 4-5Hour red eye is not easily get some eye shut in recliners

I flew Silkair DRW-SIN in July. Fare was around $300 pp one way with departure at around 4pm. Service was great. We could have flown with Jetstar for half the cost, however it departed DRW at 0600! I would thoroughly recommend SilkAir.

Air Vanuatu operates a B737-800 (with the Sky Interior) to/from Australia, with this particular aircraft having commenced service with the airline in early 2016. It replaced an earlier model of the same aircraft type.

One of the comments above refers to the rumour of new flights starting from Busselton-Margaret River Airport. It would be interesting to see the impact of operational factors, such as the length of the airport’s runway, on passenger loads on the rumoured flights to Singapore and Melbourne/Sydney, with flights to/from Singapore also needing to be cleared by customs, immigration and quaratine agencies.

Silkair are looking at serving Karatha as well.

With Jetstar already operating the A320 series and with NEOs on order, it would be easy to incorporate them into the Qantas fleet. Just because they operate the B737 now doesn’t mean that they are necessarily right for Qantas going forward. A lot of route, payload, operating cost analysis needs to be done before making a decision.

I believe Alan Joyce or another exec has said a decision on Project Double Sunrise would be made in 2019. I think they will make an order announcement in August with the airlines financial results. The short haul replacement project would then commence.

Couldn’t agree more. Townsville is drastically under serviced, and a lone Bali service has always seemed a strange option for the city.

Still surprised an airline hasn’t explored a doubled ended service between NZ and SE Asia via Townsville, akin to the SQ service through Canberra. It would give the city two international destinations in one move, and provide enough economy of scale to underwrite proper international services.

QF, VA and JQ seem hell bent on ignoring the potential growth, development and expansion of services out of and through Australian regional cities like Hobart, Canberra, Newcastle, Sunshine Coast and Townsville. The MoM / NMA aircraft would seem to be a potential solution to equipment issues, providing a lower capacity widebody with suitable range – provided the airlines want to make the market.