When the first reconfigured Qantas Airbus A330 rolls out of the airline’s Brisbane maintenance hangar, it will feature not just new business and economy seats but also an improved inflight entertainment system.

As part of an upgrade to the A330’s IFE, passengers in both classes can enjoy a Panasonic high definition touchscreen and new graphical user interface which offers what the airline describes as “interactive swiping capability”.

There will also be a number of new features, such as “My Flight” which shows passengers when meals will be served, the lights will be dimmed or cabin prepared for landing. The airline will also offer inflight shopping through the touchscreen.

Qantas group executive of brand marketing and corporate affairs Olivia Wirth says IFE was a key consideration for many travellers when choosing which airline to fly with.

“We believe that it is absolutely critical to make sure that we have our customers continuing to be loyal to us and that’s why we are investing more in IFE,” Wirth told reporters in Sydney on Thursday.

As far as what to watch is concerned, Qantas said its new partnership with Sky News, Foxtel and Fox Sports, as well as support from content service provider Stellar Entertainment, would offer more choice for passengers.

News bulletins from Sky News shown on Qantas flights would be updated three times a day, seven days a week under the new arrangements.

Sky News chief executive Angelos Frangopoulos said the broadcaster was aiming to deliver its news bulletins to Qantas aircraft digitally, which would eventually replace the system of tapes, CDs or USB memory sticks currently being used.

Frangopoulos said the necessity to have updated content for Qantas was already having an impact on how Sky News reporters filed their stories.

“Our reporters are recording fresh news updates specifically to meet the Qantas deadlines in terms of tape delivery but that is just the beginning,” Frangopoulos said.

“We are rolling out new digital distribution technology which Qantas will have more to say about soon, to ensure that when a plane lands and before it takes off on its next sector it actually will have the latest news loaded.”

The number of movies and tv programs had also been boosted.

Virgin Australia had offered a selection of Foxtel channels live to air – including Sky News, the full suite of Fox Sports channels, Fox8 and nickelodeon among others – as part of its now-concluded tie-up with Foxtel.

However, the pay-tv provider was taking a different approach with Qantas, which will have a Foxtel Picks channel, featuring a selection of the most popular programs such as Grand Designs Australia, as well as sports highlights and documentaries, as a standalone offering alongside all its other on-demand content.

MCN will sell advertising on Qantas’s new IFE system, with Mercedes Benz believed to be the first major brand to sign up.

The first reconfigured Airbus A330 was scheduled to begin flying domestically before the end of the year.

While Qantas’s fleet of Boeing 747-400s and Airbus A380s were not going to get the latest touchscreens featured on the A330, passengers on those aircraft will get the new Foxtel content, as well as more choice of movies and television programs.

“We’ve already got Q-Steaming on many of our aircraft which have the iPads already installed,” Wirth said.

“But we believe we can take this one step further and really, as we invest in the BYO, make it a far superior product to what our competitors have.”

Virgin Australia offers wireless streaming entertainment in its fleet, where passengers download an app to their own device to watch television programs and movies delivered from an on-board server. 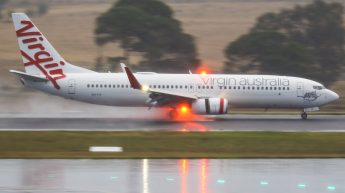