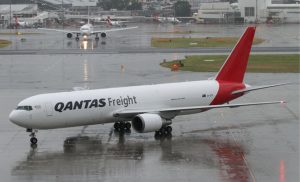 Qantas and Emirates have agreed to co-operate on freight services as part of their larger tie-up. (Seth Jaworski)

Qantas and Emirates will offer cargo customers streamlined access to freight capacity as part of the larger alliance between the two airlines, the carriers announced this week.

As part of the alliance, which is pending regulatory approval, Emirates SkyCargo and Qantas Freight will cooperate to offer seamless access to cargo capacity on both carrier’s passenger services.

Lisa Brock, the executive manager of Qantas Freight Enterprises, said the agreement would give Qantas customers access to 65 Emirates destinations in Europe, the Middle East, North Africa and Asia.

“With the introduction of seamless connections between our domestic and international network, we will offer unmatched access for Australian exporters and global businesses wishing to reach markets in Australia,” Brock said.

Brock said the arrangement would allow time-sensitive cargo shipments between Australia and Europe to connect via Dubai as a one-stop service. All cargo arriving in Dubai will be handled through Emirates’ state of the art Cargo Mega Terminal.

The cargo agreement is scheduled to take effect along with the rest of the alliance on March 31.