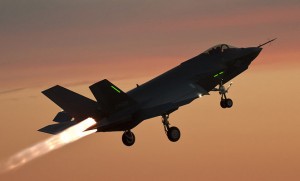 The F-35 test program has made solid progress, according to a US government report. (Lockheed Martin)

Even as a US government report has given the beleaguered F-35 Joint Strike Fighter program improved marks, the next-generation fighter has emerged as a prime target of Pentagon planners looking for ways to slash the defence budget, according to reports in the US media.

With the Pentagon needing to find some $46 billion in savings under mandatory cuts known as the sequester, the $396 billion F-35 program — the most expensive in Pentagon history — looms an obvious target. Yet even as the Obama administration publicly works to avert cuts it describes as clumsy and indiscriminate, senior officials quietly view the sequester as an opportunity to scale back bloated “Cold War-era” weapons systems such as the F-35, according to a report in The New York Times.

According to The Times, which quoted unnamed defense officials, planners believe cuts to such programs could save significantly more than $43 billion, freeing up money to expand efforts now seen as more critical, such as building more drones, developing cyberwarfare capabilities, and expanding Special Forces units.

Major cuts to the program are certain to face significant political resistance and would be poorly received by F-35 partner countries such as Australia, since scaling back the US buy would increase per unit costs. Prime contractor Lockheed-Martin has spread F-35 work across nearly every state in the US, allowing it to argue that cuts to the program will cost jobs.

But changes in the political atmosphere in Washington mean that deep defence cuts are widely seen as more likely now than at any time in recent history. Even without the sequester, budget hawks now outnumber defence hawks in the Republican Party, while Democrats are focused on protecting social programs.

Past delays and massive cost overruns in the F-35 programs have also alienated many on Capital Hill, with influential US Sen. John McCain famously lambasting the program in late 2011 as “both a scandal and a tragedy.”

A US government report released this week, however, painted a picture of a program steadily improving despite continued challenges.

“Overall, the F-35 Joint Strike Fighter program is now moving in the right direction after a long, expensive and arduous learning process,” the report by the General Accountability Office said. The GAO was ordered to provide annual updates on the program’s progress in 2010.

According to this year’s report, released in the US on Monday, the F-35 met seven of 10 ‘management objectives,’ including key goals on cost efficiency and training.

Nevertheless, the report painted a generally upbeat picture, saying flight testing had improved despite the brief grounding of the entire F-35 fleet in February after a crack was found in a turbine blade. Both the Marine Corps’ F-35B STOVL variant and the Navy’s carrier-based F-35C are now ahead of schedule in their test flight programs. The Air Force’s F-35A remains behind due to problems with its air refueling system but has achieved several important milestones.

Cost efficiency is also improving as a result of a faster delivery pace and decreasing labor hours, though the program is still expected to cost about $12.6 billion per year through 2037, a figure that could easily change.

The Defense Department has acquired 52 F-35s to date, including 14 test models, the GAO said.

It is an over-simplification to say that the GAO report “painted a generally upbeat picture”. One sentence that jumped off the page:

“Once acquired, the current forecasts of life cycle sustainment costs for the F-35 fleet
are considered unaffordable by defense officials.” (GAO report p.23)

Of course, the problem is being worked on, but it will cripple the program if it is not resolved.

The report then goes on to say:

“Uncertainties and delays in the F-35 program are forcing new plans for recapitalizing fighter forces and the military services are incurring increased costs to buy, modify, and sustain legacy fighters.” (p.23)

That pretty much describes the situation of the RAAF as it considers buying another 24 Super Hornets.

Please, no, don’t kick the F-35 in the guts now! Why can’t this program just get a decent amount of momentum? It would be nice to see it gain traction once and for all, and put an end to all the controversy and uncertainty. I know I’m sick of it!

So does this mean it’s now pretty much a certainty that we’ll be ordering another 24 Super’s, meaning this is the last nail in the coffin for getting our 100 5th gen fighters anytime within the next ten years?

Software maintenance will be one of the main long term costs for the F35 as LM will not give Australia the source code so for the entire life of this aircraft Australia will have to pay LM enormous software costs both for any new weapon systems plus for each routine software updates. Do not trust LM to be upfront about software costs.

The other long term sustainment costs clearly excessive, especially as 5th gen stealth should be much lower maintenance cost than current stealth maintenance. One engine may be lower long term cost to maintain as any significant failure will most likely crash the aircraft (aircraft loss with engine failure much lower risk with two engines).

F 35 is still looking like a dud, don’t buy the first production run, wait an see what final cost is and then buy some late production models if they are worth buying. Do not put all our important air capability eggs in the expensive LM basket.

I share Raymonds sentiments- having laboured through a seemingly agonising development fraught with concern and complication the Lightening program is finally showing some sucess and promise.
Then out come the “US defence pruning secuteers” and guess what the inflated cost puts another few lungfulls of air in the defence budget balloon and then bang. Ive got to say Im not suprised by the ongoing and continuing concerns. The future hypotheticals for this progam are unfortunatley balanced in the negative in my mind. It’s dissappointing but in its most basic form the ongoing questions are – Capability – if can Great! (optimism/trust wins)what if it cant?. Numbers- ? (If I buy one Lobster and one bottle of Champaign and then invite a dozen people around can I still call it a Dinner party?) Cost- (well we could but the big question is weather we should)
Please excuse the sarcasm and appologies to the optimists out there.

Only an act of God will stop this programe.Buy another 150 Rhinos in block 3 config.

This sums up why we should avoid ordering more 4th gen fighters (e.g. extra Super’s) if possible and instead acquire the RAAF’s stated goal of 100 F-35’s.

I don’t think masquerading under the name of a real journalist is very cool Peter.

This comment of Geoff Brown is not only one persons opinion it is also the opinion of someone who was involved in the decision to purchase the F-35.

So CAF may have some bias.We used to have a really good expression for this type of opinion, CAF is just part of a F-35 “self licking ice cream”.

Opinions of senior Defence Managers are worth listening to and then proper analysis is needed to make informed decisions. The whole F-35 purchase process has not followed the careful capability development process in Defence; it has bypassed many of the important safe guards. The whole F-35 purchase seems to be based on the opinions of politicians and some older RAAF pilots, not on good strategic analysis.

This of course will risk the lives of the younger pilots who will eventually have fly these aircraft that are not even real 5th gen aircraft (They lack many true 5th gen features) . They are day 2 or day 3 aircraft, they are not designed to get air superiority they are designed for the US to use once the skies are secured by F22s.

Unfortunately Peter because you keep on insisting on impersonating someone else, this forum will be kicked in the guts and killed off!

You might be in the highest level of Governent for all we know, you might be a person who knows everything about what there is to know about military decisions and has a role in making those decisons or you could be just working at the local hobby shop, but really who cares. No one on this forum does….

What I’m saying is go get a life! Don’t try and impersonate someone else’s. and get of the forum OXYGEN THEIF!!!! Before you ruin it for others…

Oh I see our “friend” is back and using someone else’s name again to abuse people. There is only one word for that: disgraceful!

“Bill” the internet is not as anonymous as you might think it is and people who use it are not all stupid and naïve. You are certainly not Andrew McLaughlin and he certainly has not allowed you to use his name in this comments section. The last time you or some else did this the posts were removed and Andrew himself posted. AA certainly know who you really are. Someone other than AA might know who you are. I wonder how you would feel “Bill” if someone used your real name here in support of the F-35?

No one has a problem with you having an opinion “Bill” nor with you expressing it and participating in a healthy debate on the F-35, however, being abusive about someone else’s opinion is not okay in my book and trying to stir up trouble by using someone else’s name is simply disgraceful. We can all pretend to be someone we are not but most of us are man enough to be who we are.

I personally believe the RAAF should acquire 100 F-18 Super Hornets and froget the F 35 altogther to save money to commit to the UCAV-6th generation fighter for our future needs.

I see you’ve subscribed to the FourCorners nonsense regarding the simulation of the F-35 vs emerging Russian threats, based on non-classified information regarding all aircraft involved and run by known F-35 critics – you seem to be easily misled.

Please dont tell me, with the required heavy load shedding and loss of ancillary systems, that you assume a 4th Gen twin engine fighter in a ‘arctic(?) or overwater’ scenario is assured a safe landing back on base? I guess that’d make the F-16 model a flop.

You claim the Air Force was misguided by preemptively signing up to the F-35 program that you suppose is turning out to be a flop, but then suggest we sign up to your fictitious Russian equivalents that are nothing more then a communist engineers wet dream? Jog on!

*Alert!* AA: we have our ‘friend’ ‘Andrew McLaughlin’ / ‘Bill’ (Peter) causing trouble once again… thanks very much; now the comments for this article will probably need to be closed off as well. You love spoiling it for everyone.

@AA is there any chance you guys can tighten up the posting criteria to keep the likes of “friend Peter” from posting for good? As Raymond says he just deliberately spoils it for everyone else.