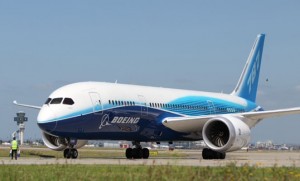 Boeing has detailed its plans to deal with 787 battery issues.

Boeing has unveiled a series of design changes intended to prevent the lithium-ion batteries of its 787 Dreamliner from catching fire, hoping the changes will allow the beleaguered jetliner to resume flights within a few weeks.

Among the changes, Boeing will wrap the eight cells of the batteries in an insulation known as phenolic glass laminate, which can resist temperatures of nearly 500 degrees C, three times the heat resistance of the current battery insulation. Boeing will also institute a gentler charging cycle to minimise battery stress and install a new titanium venting system. Finally, the batteries will be placed within a steel box that would contain any smoke or flames should the batteries catch fire.

Boeing said the changes would add about 68kg to the aircraft’s weight. Though a modest figure in relation to the aircraft’s overall weight, the addition is enough to cancel out the weight savings from using lithium ion batteries in the first place, which were chosen despite known issues with battery combustion. The nature of the changes proposed by Boeing also highlights the continued uncertainty over the cause of a pair of battery incidents about 787s early this year and suggests that Boeing may never discover exactly what caused the problems.

The US Federal Aviation Administration approved the changes last week and Boeing has already launched a series of 20 certification tests. The company plans only a single flight test since the batteries are only normally used while the aircraft is on the ground. Boeing expects to conclude the tests, most of which will be conducted in a lab, within two weeks.

All 50 of the 787s Boeing has delivered to airlines have been grounded since January after a battery ignited inside a parked aircraft in Boston. That followed a battery incident that forced a 787 to make an emergency landing in Japan.