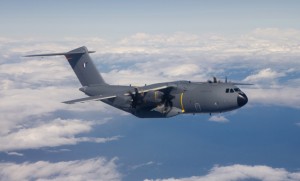 The first A400M airlifter is set for an 'on time' delivery three years late, according to Airbus. (Airbus Military)

The first production version of Airbus Military’s A400M airlifter has completed its maiden flight, with the company saying the aircraft is on schedule for delivery to the French Air Force by June.

‘On schedule’ is, of course, a relative term. France was initially supposed to receive its first A400M roughly three years ago. But after a series of production delays Airbus earlier this year promised to deliver the first aircraft prior to the Paris Air Show.

The aircraft in question, known as MSN7, took off from Seville, Spain at 11:48 local time and landed in the same location 5 hours and 42 minutes later. Airbus said the aircraft performed as expected.

“The result of this first flight gives us full confidence for the on-time delivery to the French Air Force,” Experimental Test Pilot Hughes Van Der Stichel, who captained the flight, said.