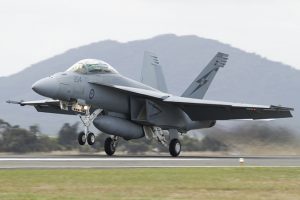 A Super Hornet at Avalon this week. (Seth Jaworski)

The US Defence Security Cooperation Agency has advised Congress of the possible sale to Australia of up to 12 Boeing F/A-18E/F Super Hornets and 12 EA-18G Growlers under the Foreign Military Sales program. The contract includes airframes and associated equipment, parts, training and logistical support, at an estimated cost of US$3.7 billion.

The notification was flagged by Minister for Defence Stephen Smith in late 2012, who said the government would seek updated price and availability information for a further 24 Super Hornets as a potential option to avoid an air combat capability shortfall.

“Australia is an important ally in the Western Pacific that contributes significantly to ensuring peace and economic stability in the region. Australia’s efforts in peacekeeping and humanitarian operations have made a significant impact on regional political and economic stability and have served US national security interests. This proposed sale is consistent with those objectives and facilitates burden sharing with our allies,” the statement reads.

“The proposed sale will improve Australia’s capability in current and future coalition efforts. Australia will use the enhanced capability as a deterrent to regional threats and to strengthen its homeland defense. Australia will have no difficulty absorbing these additional aircraft into its armed forces.

“The proposed sale of this equipment and support will not alter the basic military balance in the region.”