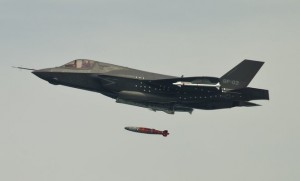 The F-35 grounding has been lifted. (Lockheed Martin)

UPDATED: The fleet-wide grounding by the US Department of Defense of the F-35 Lightening II has been lifted, following the completion of engineering analysis on the cracked blade. The cautionary flight suspension was implemented on February 21 following the discovery of a 15.24mm crack on a third stage turbine blade during routine inspections of a test aircraft F135 engine.

In a media statement, the F-35 JPO said flight operations had been cleared to resume following fleet wide engine inspections.

Comprehensive tests on the blade were conducted at the Pratt & Whitney facility in Middletown, Connecticut. The engine in question is part of the F-35 test aircraft fleet and had been operated for extended time in the high-temperature environment in its mission to expand the F-35 flight envelope,” the statement read.

“Prolonged exposure to high levels of heat and other operational stressors on this specific engine were determined to be the cause of the crack. No additional cracks were found during inspections of the remaining F135 inventory.”

Not surprising it occurred on the engine used for testing the pointy end of the performance envelope. How many aircraft engines can last at high power settings for long periods? Not many, even the F-22’s engine wouldn’t operate at high temps and pressures for any lengthy amount of time

The proof is in the pudding with APA. Their facts on the JSF seem, well, baseless. Considering that LM, the US government and operating governments are keeping a very tight lid on performance specs, one must wonder where they in fact they got the information from. Surely if they do have an “inside source,” that person(s) would be in breach of secrecy laws both here and abroad. The creditably and usefulness of the information must therefore be reduced to zero as it based largely on assumptions. I don’t believe any government would accept a lower performing fighter than what they had signed onto. That wouldn’t make sense would it?