First A350 with wings complete emerges for outdoor testing 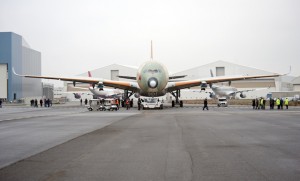 MSN001 complete with wings in Toulouse, being repositioned for further tests. (Airbus)

The first structurally complete A350 has moved to its next phase of ground testing.

The aircraft , MSN001, recently successfully completed a series of indoor ground tests including stability tests on ‘movable’ elements such as rudder, elevators, ailerons and wing spoilers and landing gears extraction/retraction.

The next phase will include three planned families of tests: fuel tanks testing – including levels, flows, sealing and internal fuel transfer functions; pressure testing of the fuselage; and radio equipment testing.