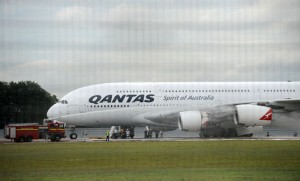 Qantas CEO Alan Joyce has told media that the Airbus A380 involved in the engine explosion and emergency landing at Singapore last year will return to service with the airline in February or March 2012.

The aircraft has been stranded in Singapore since one of its Rolls-Royce Trent 900 engines disintegrated shortly after takeoff from Singapore and its subsequent safe landing on November 4. The uncontained failure severely damaged the aircraft’s left wing spar and numerous wiring harnesses and subsystems.

The aircraft, VH-OQA Nancy Bird Walton is currently being repaired in Singapore by Qantas, Airbus and Singapore Airlines staff. Joyce said the wing spar had been replaced and the aircraft would be taken off jacks in November and conduct a comprehensive flight test campaign before returning to service.

Airbus COO Customers John Leahy added that the flight test campaign would resemble the one a newly built airliner undergoes before delivery to an airline.