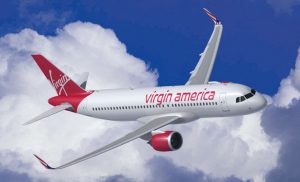 Virgin America has signed a firm order for 60 Airbus A320s including 30 A320neos, becoming the first customer to sign a contract for the re-engined narrowbody airliner, and at the same time taking total Airbus orders to 10,000 aircraft.

Virgin America is the second airline to commit to the A32oneo but the first to sign a contract for the newly launched A320 derivative, after Airbus announced India’s IndiGo signed an MoU for 150 A320neos earlier this month.

“We hit our 5000th order in August of 2004 – after more than 30 years. To achieve the 10,000th order just over six years later is a ringing endorsement of our product line,” said Tom Enders, Airbus president and CEO. “And it gives a strong boost to our new, eco-efficient A320neo when ‪Virgin America, one of our newest and trendiest customers, places the first firm order, for which we are extremely grateful.”

Virgin America will configure its A320s and A320neos in 146-149 seat two class configurations, and has yet to announce an engine selection for the new aircraft.