IndiGo to launch A320neo as part of record order 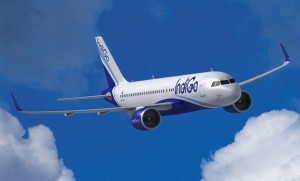 Indian budget carrier Indigo has signed an MoU for a record order of 30 current model A320s and 150 A320neos. (Airbus)

Indian budget carrier IndiGo will be the launch customer for Airbus’s re-engined A320neo as part of a potential record order for 180 aircraft, which the manufacturer says would be the largest single order in commercial aviation history.

IndiGo has signed an MoU with Airbus for 180 A320s, of which 150 will be A320neos and the remaining 30 current model A320s. The A320neo (New Engine Option) will be available from 2016. A revamped version of the original A320, it features more efficient CFM Leap X or Pratt & Whitney’s PW1100G geared turbofan engines and will also feature the new sharklet winglets.

IndiGo said in a statement that engine selection for its A320neos will be announced at a later date.

“This order for industry leading fuel efficient aircraft will allow IndiGo to continue to offer low fares,” said IndiGo co-founders Rakesh Gangwal and Rahul Bhatia in a statement. “Ordering more A320s was the natural choice to meet India’s growing flying needs. The opportunity to reduce costs and to further improve our environmental performance through the A320neo were key to our decision.”

Airbus’s COO Customers, John Leahy, added that the A320neo offers “maximum benefit for minimum change. This order positions IndiGo to take full advantage of the predicted growth in Indian air travel and we are delighted that they continue to build their future with Airbus.”