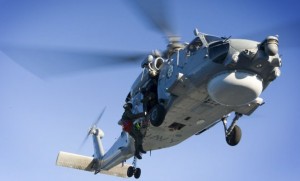 Two Royal Australian Navy (RAN) Seahawk helicopters will be redeployed to Victoria today to work in support of the ADF’s Victorian Flood Response.

The two Seahawks will relocate from RAAF Base Amberley, where they have been supporting Operation Queensland Flood Assist. It is expected the helicopters will assist in the movement of emergency services personnel and the delivery of emergency supplies to communities isolated by flood waters.

The ADF has been providing support to the Victorian State Emergency Service (VICSES) since 14 January 2011, with 100 personnel and over 40 land vehicles. ADF units have also met VICSES requests to deliver almost 200,000 sandbags, stores, fuel, sand, water and bedding to a number of communities in the flood-affected region. As part of the effort, 76,000 ADF sandbags were also transported by RAAF aircraft from Townsville and Brisbane to Melbourne over the weekend.