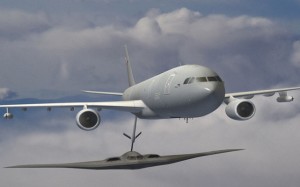 Northrop Grumman has re-stated its threat to not bid its A330 based KC-30 for the USAF’s troubled KC-X tanker program unless significant changes are made to the RFP conditions, according to a report by Reuters.

In a letter dated December 1 and sent to Ashton Carter, the Pentagon’s undersecretary for acquisition, technology and logistics, Air Force Secretary Michael Donley, and Deputy Defense Secretary William Lynn; Northrop Grumman President Wes Bush stated, “The department’s responses to date to our submitted questions suggest that the department is not planning to substantially address our concerns in the final release of the RFP. As a result, I must regrettably inform you that, absent a responsive set of changes in the final RFP, Northrop Grumman has determined that it cannot submit a bid to the department for the KC-X program.”

“Based on where we are today, if there are not any changes it is our conclusion that we can not compete for this program,” echoed Northrop Grumman CFO Jim Palmer at the Credit Suisse First Boston 2009 Aerospace & Defense Conference in New York.

Carter’s office responded on December 1, saying that Defense Secretary Robert Gates “regrets” Northrop Grumman’s position, adding that the Pentagon “cannot and will not change” the tanker’s requirements “to give advantage to either competitor”, and that the Pentagon had “played this right down the middle and will continue to do so.”

Of chief concern to Northrop Grumman is that the RFP will not give extra credit for bidding a larger and more capable aircraft, and thus favour the smaller and cheaper KC-767 being offered by Boeing. Boeing has said only that it is offering a ‘KC-7A7’ at this stage, which may be a 767 based solution or possibly a tanker based on the much larger 777-200ER, but it is waiting for the final RFP draft before deciding which to bid. But most observers believe Boeing will bid the KC-767 as it has already invested much into that and similar programs for Italy and Japan, and that a 777 tanker would take too long and too many resources to develop.

Northrop Grumman’s threat echoes similar rhetoric from the failed 2006 competition in which the KC-30 was selected as the successful bidder, only to be overturned on appeal. No extra credit for exceeding the RFP’s minimum requirements was planned to be given during that effort either, and was only added late in the process after Northrop Grumman threatened to withdraw.