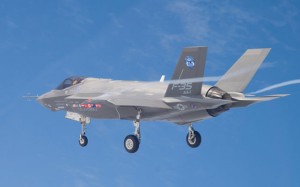 Perth based Quickstep Holdings has signed an MoU with Lockheed Martin and Northrop Grumman to manufacture as much as $700 million worth of work comprising lower side skins, maintenance access panels, F2 fuel tank cover, lower skin and in-board weapons bay doors for the aircraft, while Marand Engineering, BAE Systems Australia and Quickstep have signed a joint MoU to produce as many as 700 vertical tails for the F-35.

“The potential value of the LTA (long term agreement) to Quickstep and to Australia cannot be overstated,” Quickstep managing director Philippe Odouard said in a statement. “As well as generating hundreds of millions of dollars in export revenue, the LTA could lead to world-class training opportunities in the highly advanced industry of aerospace composites. Australia is ideally placed to carve itself a much bigger slice of the global defence market.”

Quickstep says that it expects the LTA would create 156 high end jobs, with a further 620 support industry jobs. The company also noted that it is also involved in talks with other parties concerning further JSF work.

“A lot of work still needs to be done to turn the MoUs into contracts but the government welcomes the ongoing efforts by Lockheed Martin and its JSF industry partners – BAE Systems (UK) and Northrop Grumman Corporation – to award work to local companies as agreed under the JSF Industry Participation Plan,” acting Defence Minister Greg Combet said. “To date, some 25 Australian companies have won more than $220 million in JSF work, primarily in design and production of the 19 test aircraft and associated support equipment.

The companies hope to have finalised the LTAs by early to mid 2010.