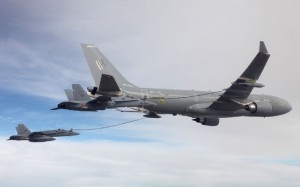 Development of the Airbus Military KC-30 (A330 MRTT) for the RAAF continues, with the demonstration of simultaneous refuelling of two fighters last week.

Little over a week after the first passing of fuel from one of the KC-30’s Cobham 905E hose and drogue refuelling pods, fuel has been simultaneously passed from the two pods to two Spanish air force F/A-18A+ fighters, Airbus Military announced on November 24. In the trial, the KC-30, the first of two for the RAAF in Spain currently undergoing testing, took off from Airbus Military’s Getafe facility near Madrid, while the F/A-18A+s launched from Torejon. During the two hour sortie, 11,400kg of fuel was passed to the two jets in 13 contacts, 11 of them simultaneous. The contacts were made at an altitude of 15,000ft and a speed of 250kt.

During the MRTT program Airbus Military says 47 dry and wet contacts have been completed so far, with 23,000kg of fuel transferred.

First A380 for Lufthansa delayed