RAAF trainees have tested their skills in No. 82 Wing’s F/A-18F Super Hornets and No. 2 Squadron’s E-7A Wedgetail as part of Exercise Gauntlet Strike.

Flying Officer Declan, a trainee Super Hornet pilot, said the operation in the Katherine region of the Northern Territory allowed him to put theory into practice.

“We got to drop real bombs for the first time,” he said.

It took place between 26 November and 9 December.

“It was also the first time we’d worked through scenarios where I’d be dealing with an air picture in the front seat, while the guy in the back would be working to find the target,” added Flying Officer Declan.

“Working in a split cockpit like that, with No. 2 Squadron and No. 114 Mobile Control and Reporting Unit feeding us battlefield data, was an awesome first for us.”

“The self-escort strike scenarios were dynamic, our planning times were condensed, and you didn’t know how things were going to play out, so you had to be flexible,” he said.

“It was really tough, but very rewarding.”

The exercise took place before the Department of Defence grounded both the F/A-18F Super Hornet and EA-18G Growler fleets, following an incident at RAAF Base Amberley.

Footage from the scene showed two RAAF pilots ejecting after their aircraft ran off the runway. It’s still appears to be in one piece, although has suffered damage to its forward starboard fuselage.

7News reported that the jet was around 200 metres into its take-off run, and that eyewitnesses reported smoke billowing from the engine before the crew ejected.

“Defence can confirm that an incident involving an Air Force aircraft has occurred at RAAF Base Amberley,” the Defence Department said in a statement. “The aircrew of that aircraft are safe and no other personnel were involved in the incident.

“Defence’s first priority is the safety of personnel at RAAF Base Amberley.

“Defence will provide more information once the immediate actions associated with the incident are completed.

“The cause of the incident is not known at this time and will be subject to investigation.” 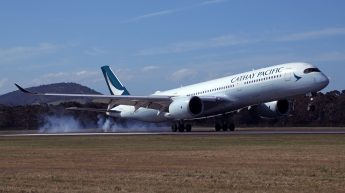