Qatari authorities forced 13 Australian women to remove their underwear for a genital examination at Doha’s Hamad International Airport against their consent, according to reports.

The invasive procedure was apparently carried out because staff found a premature baby abandoned in a bathroom.

In response, the Australian government has said it has formally registered “serious concerns” with Qatari authorities over the incident that witnesses said subsequently left women in tears.

The story, broken by Seven News and confirmed by The Sydney Morning Herald, alleges that the women were on board flight QR908 from Doha to Sydney on 2 October before being asked to leave the plane to be detained.

The ABC spoke to a witness on the flight, Wolfgang Babeck, who said passengers were waiting on the tarmac for several hours before all women were told to disembark.

“I thought the more vulnerable persons are being taken out and I was wondering what will happen now, are they looking for someone, are they searching the plane?” Dr Babeck told RN Breakfast.

“Then some security people came onboard and looking [to see] whether passengers had been hiding on the plane.

“When the women came back, many of them or probably all of them were upset — one of them was in tears, a younger woman. People couldn’t believe what had happened.”

The Australian women then had the ordeal of having to complete two-week hotel quarantine after the plane landed in Sydney, but were provided with “medical and psychological support” by NSW Health.

Australia’s Department of Foreign Affairs and Trade said in a statement, “The Australian government is aware of concerning reports regarding the treatment of female passengers, including Australian citizens, at Doha (Hamad) airport in Qatar.

“We have formally registered our serious concerns regarding the incident with Qatari authorities and have been assured that detailed and transparent information on the event will be provided soon.”

Hamad Airport said in a statement released to the ABC that the premature baby was safe and receiving care, but that the mother hasn’t been located.

“At this time, the newborn infant remains unidentified, but is safe under the professional care of medical and social workers,” the statement said.

“Medical professionals expressed concern to officials about the health and welfare of a mother who had just given birth and requested she be located prior to departing [the airport].”

That state of Qatar effectively owns both Hamad Airport and the flag carrier, Qatar Airways.

In June, Australian Aviation reported how Qatar Airways’ share of passengers travelling to and from Australia leapt from just 3 per cent to 44.5 per cent in April.

The jump meant the carrier, owned by the namesake state, was by far the biggest in terms of passengers carried – with previous number one Qantas slumping from 17.9 per cent to just 2.9 per cent.

The airline, which is owned by the state of Qatar, has made much of its decision to keep flying during the pandemic, launching a huge PR offensive using the slogan ‘Taking You Home’.

Group chief executive Akbar Al Baker, said, “While many airlines suspended operations, we continued to maintain a robust schedule and network. Our commitment to the travel market is clear, Qatar Airways is the airline passengers and trade partners can rely on now and in the future.” 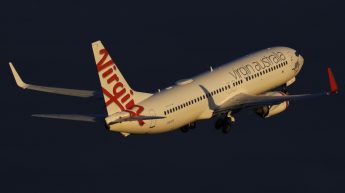