An Air New Zealand flight hosting the premiere of a documentary on Kiwi rock band Six60 has sold out in seven hours.

The A321neo will depart Auckland as NZ660 on Saturday, 14 November and land in Dunedin on the South Island later that day.

The band themselves will catch the service, which is also intended to boost tourism to the stars’ home city.

Six60 has been billed as the country’s biggest home-grown music act and were the most streamed Kiwi band on Spotify in 2018.

They’ve also become one of the few local acts to sell out the 49,000 capacity Western Springs Stadium.

The flight also follows a recent trend of themed flights and so-called flights to nowhere that have occurred since the start of the coronavirus pandemic.

Air New Zealand’s marketing general manager Jeremy O’Brien said, “We’re thrilled the tickets sold so quickly – it’s a real reflection of the band’s popularity and how proud we are of them as Kiwis.

“We’re putting on our larger A321neo aircraft for the service, and we expect the full flight will help boost local business and tourism in Dunedin over the weekend.”

The documentary, entitled SIX60: Till the Lights Go Out, was created by local filmmaker Julia Parnell.

“Because the package is built around a one-way ticket to Dunedin, it’s also a way of supporting tourism to the city and the region,” said O’Brien. “We hope most passengers will consider staying a night or two or exploring the region further once they get there.”

The current chief financial officer has been with the carrier for more than two decades and will leave after he’s helped oversee the planned capital raise.

The departure comes after current chief executive Greg Foran culled his most senior executive team from nine to six in May, and a month after chief commercial and customer officer Cam Wallace resigned after 19 years’ service.

“Without Jeff’s leadership over the past two decades, especially as part of the executive team in recent years, the airline would not have delivered its long run of commercial success or grown its international footprint around the world so successfully,” Foran said. 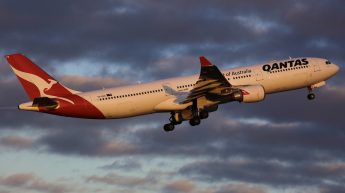 Tips for Australian Aviation Awards victory from a serial-winner