A New Zealander is returning home to run the national carrier.

Air New Zealand announced retail executive Greg Foran as its new chief executive on Friday. He will officially commence in the role during the first quarter of 2020.

Foran replaces Christopher Luxon, who left the role at the end of September.

The New Zealander will arrive at Air New Zealand from global retailer Walmart, where he has been president and chief executive officer of the company’s United States operations since 2014. He also previously worked with Australian supermarket company Woolworths.

Air New Zealand chairman Dame Therese Walsh said the board was thrilled to have attracted a “world class Kiwi back home”, noting Foran grew up in Hastings and Hamilton on the country’s North Island.

“Greg has an impeccable track record in delivering strong commercial performance, outstanding customer focus and in building teams that can take a business to the next level,” Dame Therese said in a statement.

Kia ora to our new leader, Greg Foran. We can't wait for you to take flight with us as our new CEO ✈️ pic.twitter.com/UjaSW2EGY1

Foran, who is the father of National Rugby League (NRL) player Kieran Foran, described Air New Zealand as one of the world’s great airlines.

“I am an incredibly proud Kiwi and to be given the job of nurturing and building on the legacy of an iconic company that represents the best of our nation at home and around the world really excites me,” Foran said in a statement.

“Air New Zealanders have an absolute love and passion for the business and their level of customer focus and care is one of the airline’s competitive advantages that I look forward to building on.

“I want Air New Zealand to continue to be at the forefront of its industry across the world and to deliver strong commercial results in the process.”

A profile of Foran by Television New Zealand’s (TVNZ) Sunday program in November 2018 described the son of school teachers as the “greatest living retailer on the planet” who started out stacking shelves at the local supermarket.

“The whole reason that I’ve ended up in retail is my mother saying well ‘why don’t you go and start as a trainee at Woolworths’,” Foran said.

“The bug that I got at a very early age never left me.

“I learnt really quickly some basic lessons. Lessons like, if you are nice to people, they will do things for you.”

After being passed over for the chief executive’s position at Woolworths in Australia, Foran joined Walmart International in 2011, where his roles included chief executive of the China business and then the Asia business.

He then took up the role of Walmart United States president and chief executive in 2014 and led a transformation program that aimed to turn around a struggling business that employed more than one million people across 5,000 stores.

“We’d lost the trust of both our associates and customers,” Foran said. “We needed to take some action on pay, on benefits, price.”

That was not without its challenges, with Walmart chief executive Doug McMillon recalling in the Sunday program that the company’s market capitalisation fell by about US$21 billion in a single day during that time.

“It’s painful, because I was part of making that happen and I can tell you that the plane ride back here from Wall Street was a really quiet ride,” Foran said.

“I felt the pressure, and I’ve never actually spoken about this with anyone.

“So I got up earlier in the morning and I worked longer during the day. You have to because people have placed a bet on me and I knew I had to deliver.”

Finally, Foran described the most important thing he brought to the Walmart job was that he was a “jack of all trades and a master of none”.

“When you grow up in a business in New Zealand, even if it is a big business, you have to do everything,” Foran said.

McMillon said Foran had it all.

“I think his perspective growing up in New Zealand is one that enables him to connect with people in a personal way,” McMillon said.

“He’s got the combination of a bright and capable mind with a good heart.”

(The full program can be found on the TVNZ website.)

Meanwhile, Luxon announced earlier this week he would seek to enter politics by nominating as a candidate for the conservative National Party in the seat of Botany in Auckland. The next New Zealand general election was expected to be held some time in 2020.

previous post Taking to the skies – how 25 students built a BushCat in seven days
next post Airtest: The Piper PA-28 Cherokee Archer LX 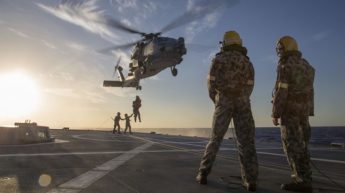