A United States pilot has offered a cautionary tale about what can happen when an aircraft is flown beyond its limits and bad choices are made.

The pilot, Mike Patey, was at the controls of his heavily-modified Draco with his wife and friend as passengers at Reno-Stead Airport when the aircraft came off the runway over during an attempted takeoff in a cross-wind.

While the aircraft was destroyed, Patey and his two passengers emerged unhurt from the crash, which was captured on video by the High Alpha Airshows Instagram account.

In a video posted on his YouTube channel moments after the accident, Patey said he was “still a little dusty and dirty where I crawled out through a door that had exploded off the plane when I first hit”.

He also took full responsibility for the incident and described it as “one of the worst days of my life”, adding that it “could have been a whole lot worse”.

“I just totalled my baby Draco in the most stupidest possible way,” Patey said. “I am going to be really hurting about this day for a long time so I hope you guys learn from this.”

“I screwed up. Made some bad choices. As a result I risked family and friend.”

Patey said when he hit the power and took off, everything felt good.

However, things started to go awry when a bump of wind lifted the left wing, prompting Patey to go “full left aileron” and kick the rudder to help straighten the aircraft out.

Then, Patey lost control when a second bump of wind was sufficient to lift the wing further and take the single-engine aircraft off the runway.

“I was a big giant kite going for a ride and I had no control left,” Patey said.

“I had control all the way to there and once I got airborne and took that second wind bump of wind that turned me 90 degrees to the wind I was along for the ride.”

Patey said he hoped other pilots would learn the incident.

“This was all my fault. A hundred per cent,” Patey said.

“I hope we all learn something for the better and become better pilots from my mistake. All my mistake.” 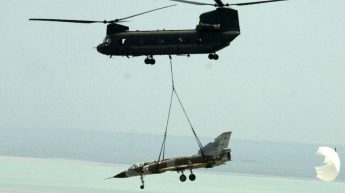 Inside the Archive: CA-25 Winjeel

Podcast: Aviation gets its lifeline, but will it work?