Airfares fell further in Australia’s domestic market in August, with discounting weighing especially heavily on fares in the business class segment, figures from the Bureau of Infrastructure, Transport and Regional Economics (BITRE) show.

Having already dropped by eight per cent with consecutive declines in each of the four months to July, the downtrend in the BITRE index of business class fares accelerated dramatically in August, falling by 13 per cent in the month.

Further, the annual fall of 21.1 per cent was the biggest drop over 12 months since 2012 and brought both the actual monthly business class fares index and BITRE’s smoothed trend measure for August to their lowest points in five years.

On August 22, Qantas chief executive Alan Joyce said it was a mixed picture in the Australian market. While the corporate sector was flat, the resources market was continuing to rebound. It was a similar story in the leisure segments of the domestic market.

“We are still seeing huge growth in the resources sector, particularly in Western Australia, but it is being offset by declines in financial and declines in telecommunications,” Joyce said at Qantas’s 2018/19 full year results presentation, which showed a 6.5 per cent decline in net profit.

“Premium leisure is actually still very strong and robust but price-sensitive leisure we’ve seen that being weak recently. That’s in the Jetstar end of the market.

“It’s a mixed bag, but with the optimism around our ability to manage capacity, I think we can manage those variations quite effectively.”

“There is no doubt that we are operating in a tough economic climate with high fuel, a low Australian dollar, and subdued trading conditions,” Scurrah said when handing down the airline group’s seventh consecutive annual loss on August 28.

“We are seeing some signs of a recovery but it is a little early to tell whether that is sticking or not.”

BITRE’s index of restricted economy class airfares fell marginally in both July and August but was still 4.5 per cent higher than a year before.

Both of these inflation-adjusted measures were lower in August than they were a decade before, business fares by 19.8 per cent and best discount fares by 11.8 per cent, respectively.

The BITRE domestic airfares series is a price index of the lowest available fare in each fare class, weighted over selected routes. 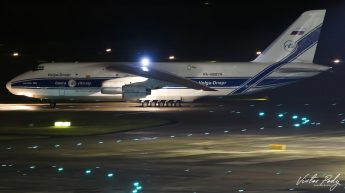 An-124 lands in Melbourne after Volga-Dnepr grounded fleet

An-124 lands in Melbourne after Volga-Dnepr grounded fleet