The company said net profit for the six months to December 31 2018 came in at $9.8 million, an improvement of 7.7 per cent from $9.1 million in the prior corresponding period.

Revenue was up 8.5 per cent to $163.8 million, Rex said in a regulatory filing to the Australian Securities Exchange (ASX) on Wednesday.

“This period was particularly difficult with fuel prices skyrocketing and with the sharp slowdown of economic activity from December due to the Sino-US trade war,” Lim said in a statement.

“I am pleased to report that Rex has bucked the worldwide airline trend of steep decline in profitability.”

Global oil prices had a volatile 2018. In October, Brent Crude Oil reached four-year highs of close to US$86 per barrel as tensions in the Middle East and the United States imposition of sanctions on Iran sent jitters through commodities markets.

However, crude then began steady retreat to its lowest level in more than 12 months at about US$62 a barrel in December as fears of reduced supply from the Iran sanctions proved overblown.

At February 22 2019, the International Air Transport Association (IATA) jet fuel price monitor was up about 1.8 per cent from a year ago.

The airline group said its total fuel bill for the 2018/19 first half jumped by more than half to $23 million, compared with $15.2 million in the prior corresponding period.

Looking ahead, the airline group said its fuel needs for the second half of 2018/19 was fully hedged when Brent Crude oil was below US$60 a barrel.

Lim said this would translate into a $2.3 million reduction in the fuel bill for the second half, compared with the first half.

During the half, Rex began flights between Perth and Canarvon and Monkey Mia, two West Australian-Government regulated routes that it won the tender to operate.

The start of those services, among other factors, led to a 4.8 per cent increase in passengers carried during the half, compared with the prior corresponding period.

Capacity, measured by available seat kilometres (ASK), rose 1.0 per cent, while average load factors, a measure of how full the flights are, rose 4.3 percentage points to 64.2 per cent.

“This is a really good sign,” Rex deputy chairman John Sharp said during the airline’s first half results presentation on Wednesday.

“Each flight that takes off is carrying more passengers and therefore more revenue is being generated.”

In terms of the fleet, Rex said it took delivery of one Saab 340B+, brining the total number of Saab 340s in the airline group to 58 aircraft.

Meanwhile, the company said it had fully repaid the mortgage on 15 aircraft, meaning it now only had two aircraft on lease.

Looking ahead, Rex said conditions were too uncertain to offer a “reliable profit forecast”, with the likelihood of business conditions slowing down ahead of the likely federal election in May and should the United States and China fail to reach a trade agreement.

“The board has grounds to believe that if trading conditions do not deteriorate further, the group could still achieve profit growth for the full financial year,” Rex said.

In November, Sharp told shareholders at the company’s annual general meeting it “cautiously confident that the group will still be able to turn in at least double-digit growth for the new financial year if fuel prices remain at today’s level”.

At the time Brent crude oil prices were at about US$62 a barrel. Currently, it sits at about US$65 per barrel.

The company declared an interim dividend of four cents per share, fully franked. 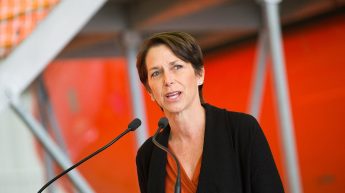