A likely contender for Qantas’s demanding Project Sunrise requirement for an aircraft capable of operating nonstop flights from Sydney to London and New York has broken cover, with the first Airbus A350-900ULR (Ultra Long Range) aircraft emerging from the manufacturer’s final assembly line at Toulouse yesterday.

The A350-900ULR is the first of seven SIA has on order for the resumption of Singapore-New York and Singapore-Los Angeles nonstop services. The airline dropped the two routes, which were previously served with four-engine A340-500s, in 2013 when high fuel prices made flying them uneconomical. A 2015 promotional image from SIA counting down the days to a resumption of Singapore-New York nonstop flights. (SIA/Twitter)

Although the first A350-900ULR, MSN216, is yet to be painted, it already features the words “Singapore Airlines First To Fly” on the fuselage alongside the A350XWB Ultra Long Range logo. 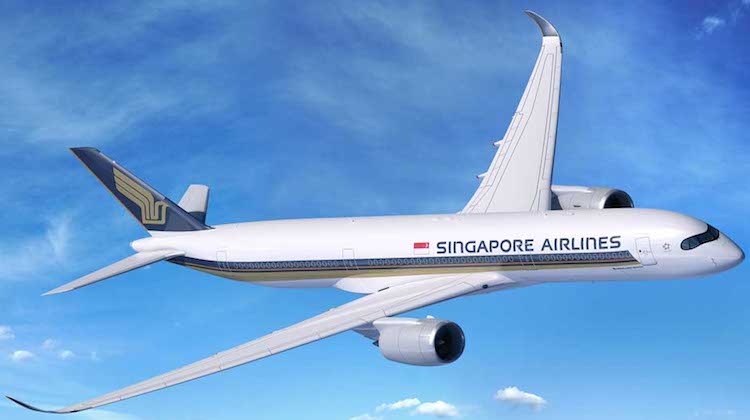 An artist’s impression of an Airbus A350-900ULR in Singapore Airlines colours. (Airbus)

The A350-900ULR has been designed with a maximum takeoff weight (MTOW) of 280 tonnes and is designed to be capable of flying up to 9,700nm or more than 20 hours non-stop.

SIA has taken delivery of 21 A350-900s, out of a total of 67 on order. Although the airline was yet to reveal the cabin layout for its A350-900ULR, SIA executives have indicated previously the cabin will feature a two-class configuration, without specifying which classes.

The A350 and Project Sunrise

Airbus is hoping the A350-900ULR is the aircraft that will one day operate nonstop from Sydney to London and New York in Qantas colours.

The Australian carrier is currently looking for an aircraft capable of flying those ultra long haul routes, and others, as part of Project Sunrise.

Airbus head of A350 marketing Marisa Lucas-Ugena told media in Sydney recently the airframer was in an “extremely good place to work on this challenge” thanks to the A350-900ULR.

“Are we better placed than anybody else to meet it? Absolutely,” Lucas-Ugena told reporters during a media briefing at Qantas’s Mascot jet base on February 12 prior to a A350-1000 demonstration flight around Sydney.

“What you see on the -900 is just the beginning and you are going to start seeing some of the developments in 2018. Yes we are ready and we will have to work hard still just to get that extra mile, literally, but we are very optimistic.”

Boeing too is optimistic about being able to meet Qantas’s requirements, with a senior executive telling Australian Aviation the company was making “good progress” in ensuring the 777-8X would be up to the task.

“I think that the baseline of the 8X is a much better place to start than any of our competitor’s baselines,” Boeing Commercial Airplanes vice president of marketing told Australian Aviation at the Singapore Airshow on February 6.

While the 777-8X is still in development and yet to reach firm configuration, the Boeing website lists the aircraft as having a range of 8,700nm and a passenger capacity of 350-375 passengers. Qantas chief executive Alan Joyce said on the sidelines of the recently-concluded Singapore Airshow a request for proposal (RFP) was expected sometime in 2019.

“We want both manufacturers to have an aircraft that is capable of doing it. If that’s the case we’ll do an RFP next year,” Joyce said during the Singapore Airshow Aviation Leadership Summit on February 5, according to Flightglobal.

It is understood Qantas was seeking an aircraft capable of carrying 300 passengers in both directions on both the New York and London routes.

Boeing back in the fold for Canada fighter competition

If the A350-900ULR is about to be launched by Singapore Airlines, what are Qantas waiting for? Allan Joyce threw out the challenge, no that the challenge is almost met, why aren’t the order books being filled out as we speak?

No Harrison.
The 777-200LR has a maximum range of 8,555nm whilst the A350-900ULR has a range of 9,700nm.
Having said that, Airbus will be offering this aircraft with an even longer range for ‘project sunrise’.
Boeing, in turn, will also be offering extended ranges on it’s 777-X product.
Both manufacturers are keeping their cards very close to their chests at this stage re their prospective offerings. Especially the ranges.

Please tell us about the engines?
What is the projected burn on take off?

@ David
Maybe they are waiting for Boeing…..

The Boeing 777x is still a paper aeroplane – yet to fly and prove itself.

@David – Singapore airlines are going for a premium-heavy configuration, mostly likely Business/Premium econ for a total of less than 200 seats.
Qantas have clearly said that what they need is something that can do Sydney to London with 300 pax on board. Now I suspect they’ll be happy if someone got close to that figure -say 280 – but the ULR in its current guise can’t do the mission Qantas wants.

Wikipedia details that Airbus had made offer in the past to BA to build an A350-900R to fly LHR-SYD that would have the 6 wheel bogie of A350-1000. If this is possible, given the A350-1000 has MTOW 308 tonnes, this would give an increase of at least 28 tonnes in MTOW. (You would assume that the bogie is designed for a higher MTOW in the future.)
As all A350s have the same basic wing, the increased trailing edges of A350-1000 should fit to provide increased lift. The A350-1000 engines would provide the necessary power.
However, Airbus has claimed that that the existing B777 takes off 40 tonnes heavier than an a A350-900, 20 tonnes heavier for the airframe and 20 tonnes extra fuel to carry the heavier weight. (Nice round figures.)
This suggests that any increase in MTOW, at the range these planes are flying, half the increase will be required for the extra fuel. Then there is the increased airframe weight.
It has been reported that Singapore Airlines A350-900ULR will carry 170 passengers and that Qantas wants to carry 300 passengers.
To carry these extra 130 passengers will require a very substantial increase in MTOW.
This is what the engineers at Airbus (and at Boeing with B777X) are trying to solve.

Fingers crossed Airbus gets the order, 20+ hours in boeing beancounter economy would be torture.

Playing devil.s advocate, when you get right down to it, how many planes is Qantas really going to order for “sunrise”. Joyce strikes me as playing ego games’—having Boeing and Airbus execs lining up to feed CEO egos. Boeing and Airbus would be wise not to allow Joyce to deform and torque this silly “contest” into a specialized low volume plane flying to the limited Market that is Australia.

@ Michael Sheridan. You may well ask Singapore Airlines how many aircraft they have on order for their ULR plans for the A359. Qantas are not the only airline seeking aircraft with greater range and an acceptable payload. United have recently expressed an interest in ULR aircraft. You can imagine if Qantas starts flying JFK direct to Sydney, United or Delta will also seek to fly the same route. Delta already have A350 aircraft on order so a change is easy most likely. For SIA an aircraft that meets the Qantas requirements could change their business plan for direct services to LA from Singapore by increasing payload. Think also European airlines such as BA and Finnair. So summing up, this is not some silly ‘contest’.

hang on, doesn’t the a340-500 launched about a dozen years ago, have the range that talked about above ?
(or it that with very few passengers & no freight ?)

Can someone explain how you can load an extra 24,000 litres of fuel without extra tanks?

I think both the A350ULR-X & the B777-8-X will be technically excellent aircraft & it will probably be the best deal that wins the impending competition. However from an economy passengers point of view the Airbus offering with a comfortable 9 abreast configuration has it all over the 777 with a likely cramped 10 abreast as now seems to be the popular trend with 777 customers ( Cathay,Emirates etc etc)
Peter

The Boeing offering will be a better product.