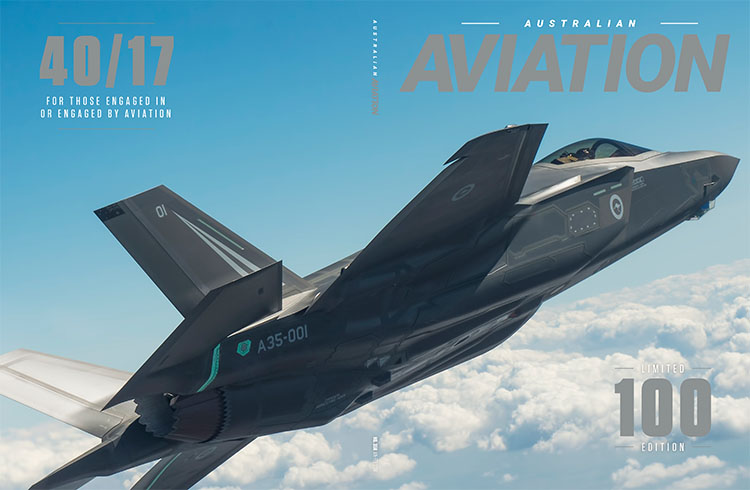 To celebrate our relaunch and our recent 40th anniversary, Australian Aviation has released a limited edition run of our new January-February 2018 issue.

Just 100 copies of the January-February issue have been produced, featuring a unique wraparound cover design, silver foil highlights, and the marking “40/17” to denote the magazine’s 40th anniversary celebrated in late 2017.

The special issue is on sale now via the Australian Aviation website for $35 including postage and handling.

“Change is the new normal and after 40 incredible years as the most acclaimed and widely read aviation magazine Australian Aviation is embarking on a generational change program, which this limited edition celebrates.”

The standard January-February issue of Australian Aviation went on sale at newsagents across Australia on Thursday January 4.

“At 132 pages this is the largest edition of Australian Aviation in some years. It includes some fantastic reading across a range of aviation topics, from drone racing to the Voyager I spacecraft entering interstellar space, and much, much more in between,” said long-time Australian Aviation managing editor Gerard Frawley.

“This issue is also a great pointer to Australian Aviation’s new direction and focus under Boo as its new publisher – more engaging content across the breadth of aviation, and content that looks at and points to the future of aviation.

“We know our readers will love it.” Another feature of the January-February issue is the return of the poster to Australian Aviation.

At Australian Aviation we are all at heart still the young kids who were inspired by and fascinated by aviation, and we all adorned our bedroom walls with aircraft posters.

That’s why with the January-February issue we are proud to bring back the poster to Australian Aviation, to inspire a new generation of future flyers and aviators.

Who knows what amazing careers in aviation an aircraft poster on a bedroom wall will help inspire? Congratulations Boo, you are really doing a great job. Well done to you as well Gerard. Rock on guys!

Congratulations to all involved with the production of Australian Aviation Magazine reaching this milestone.
I have enjoyed the Magazine content since 1980 as a direct mail subscriber and look forward to many more years.
Always very informative and entertaining.
I seem to recall a very similar cover to the current January / February cover being issued some years ago.
Thanks for a great read.

You always breathe a sigh of relief when your ‘baby’ is taken over by somebody else, particularly somebody you don’t personally know and the outcome looks great. Seeing the first issue under Christian though gives me hope that all is well in ‘AA land’ and that the team will move forward, prosper and continue the spirit as one of the world’s leading specialist interest magazines.