Thousands turn out for Townsville T150 airshow and open day

An estimated crowd of 80,000 lined Townsville’s the Strand on Saturday for the T150 Defence Force Airshow, while many thousands more visited RAAF Base Townsville on Sunday for an open day, part of the north Queensland city’s 150th anniversary celebrations.

Defence photographers captured the following images from the airshow and open day: A RAAF AP-3C Orion and HARS’s SP-2H Neptune in a formation flypast. A RAAF C-17 Globemaster performs a low-level flypast in front of the Strand. Townsville’s Castle Hill is the backdrop to the Temora Aviation Museum’s Hudson bomber. 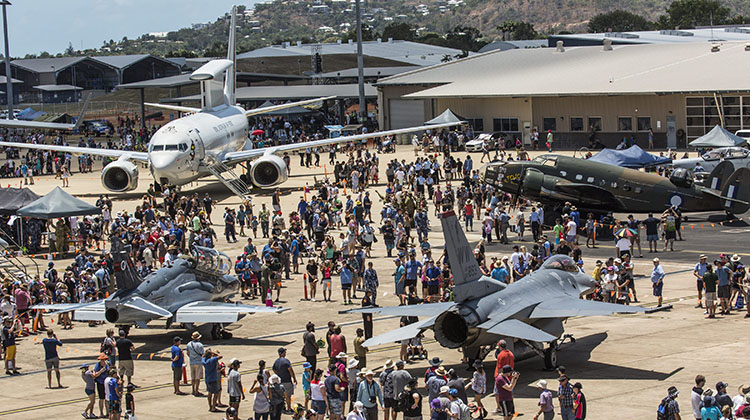 Crowds at RAAF Base Townsville for the base open day on Sunday.

Airport Safety Week back for 2016

By the appearance of things this is rapidly becoming a substantial military airshow. It will be interesting to see if it remains military only, and Aus / US only.

Was a well organised event, most were on time and few delays and everyone had a great time. Might be good to get Singapore involved as their involvement in Townsville is about to increase dramatically and maybe something from NZ as well.

Maybe next year, Australia might ask Saab for the gripen, eurofighter for the typhoon and dassalt for the rafale to all bring their fighters to the air show.

The annual Defence Force airshow is always military only – it rotates around various bases such as Edinburgh, Williamtown, Amberley, Pearce etc every year.

Fabian,this will never happen.Australia has made up their minds about what they are buying.Teddy,hence ADF airshow which stands for Australian Defence Force.

Looks like a great spot for a great event. Has anyone heard where the next ADF airshow is scheduled to be actioned ( I don’t mean Avalon 2017) ?

I attended the events with my wife and my brother all travelling up from Adelaide. The quality of flying and static displays was superb along with the weather. Hats off to Townsville and the ADF -you have done us proud again.

Dont know if anyone noticed that the outer starboard prop wasn’t spinning half the time.

Its a shame Singapore and Malaysia couldn’t attend.Probaly saving that for Avalon.