While Clifford and chief executive Alan Joyce did not offer specific earnings guidance at the annual general meeting (AGM), the long-time Qantas chairman was upbeat about the airline’s prospects in the period ahead.

“The global economic recovery and geopolitical environment remain volatile and the domestic economy has been subdued as it continues to transition from the mining boom,” Clifford told shareholders at the AGM in Sydney on Friday in prepared remarks.

“Despite the recent rise in oil prices, our disciplined hedging program means we are well placed to ensure that the group’s fuel bill is no higher this year than last year.

“However, these mixed conditions only underline the importance of management’s continued focus on transforming the business to perform well even in a challenging market.” 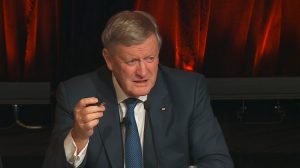 A screenshot of Qantas chairman Leigh Clifford on the webcast of the annual general meeting. (Qantas)

Clifford said Qantas was well-placed to capitalise on the projected growth in aviation in the years ahead, noting the number of air travellers was forecast to double to about seven billion by 2034, led by the soaring demand in Asia Pacific.

“With our proximity to Asia, Australia is part of the most dynamic region in the world,” Clifford said.

“And changes in technology, demographics, and the global economy are presenting new opportunities for the group.”

In August, Qantas handed down a $1.03 billion net profit after tax for the 12 months to June 30 2016, up up 84.7 per cent from $557 million in the prior corresponding period. It was the largest profit in the airline’s history.

The company also announced a seven cents per share full franked dividend to shareholders – the first dividend since 2009 – and a $366 million share buy-back.

Clifford said in response to a question it company policy that dividends would be the “first preference” for shareholders “ahead of any other form of capital return”.

Further, the airline was on track to achieve $2.1 billion in cost and revenue benefits as part of its three-year transformation program by the end of 2016/17, including $450 million in the current financial year.

Since August, Qantas has announced a number of new routes – Melbourne-Tokyo (Narita) starts in December, Sydney-Beijing takes off in January and there are also some seasonal increases on existing routes.

While that expansion is taking place in the context of a low fares environment for overseas travel and growing capacity among Qantas’s international peers, Joyce said the new routes would be strong performers given underlying demand and the lower Qantas cost base due to its transformation program. 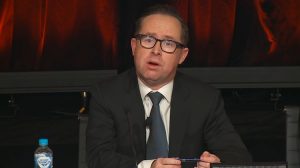 A screenshot of Qantas chief executive Alan Joyce on the webcast of the annual general meeting. (Qantas)

“Even in a crowded international market, these are routes we know can generate good returns,” Joyce said in prepared remarks.

“Like most other global carriers, intense competition on international routes means we’re seeing air fares below where they were 12 months ago.

“And the economic transition in Australia and broader geopolitical issues in the Northern Hemisphere continue to have an impact on aviation markets globally.”

Joyce said the airline group would release its first quarterly earnings update by the end of October. The quarterly trading update replaces monthly the traffic and operating statistics, which are no longer published.

Joyce said the quarterly updates provided more transparency to shareholders about how the business was performing compared with the monthly traffic statistics.

The chief executive also confirmed details about Qantas’s first Boeing 787-9 route would be announced before the end of October.

“We’ve said the first Dreamliner routes will be on sale before Christmas and you’ll be hearing more detail about what to expect from this aircraft before the end of the month,” Joyce said.

“The Dreamliner represents a new era and possibilities for Qantas.”

Qantas has firm orders for eight 787-9s and holds a number of options and purchase rights for the next generation aircraft.

Meanwhile, Joyce said in response to a question from a shareholder the company had not made any decisions on the proposed Badgerys Creek airport in Sydney’s west. An artist’s impression of a 787 in Qantas colours. (Boeing)

US to Australia the long way: Jetgo’s first Embraer ERJ-140LR arrives Down Under

domestic actually might do better, but international will be a basket case, as many people put off international travel, but may instead fly domestically instead & expect Jetstar & Tiger to do very well as people close their wallets.

About time that QF discovered that Adelaide people actually travel to Asia and would like QF direct option.
Is anybody in Qf marketing awake ?????