Air Marshal Leo Davies (left) has taken over command of the RAAF from the retiring Air Marshal Geoff Brown. (Defence)

AIRMSHL Davies, formerly Deputy Chief of Air Force and a one time F-111 pilot, formally began his tenure as CAF during the change of command ceremony held outside the Defence Department’s Russell Offices.

“Over time you will make your judgements over what kind of Chief I am. But if it gives you a clue, my office wall is covered in photos of people rather than aircraft. I hope that this will come to symbolise my priorities over the next four years,” AIRMSHL Davies told the ceremony.

“What do I mean by that? Firstly, I think our aircraft fleet is in great shape. We have a modern, balanced, potent inventory. It is the best we’ve ever assembled. I commend my predecessor Geoff Brown for his sterling efforts in setting those conditions for success. To maximise the effect of those systems we need to empower our people. We need to create a culture that encourages adaptation to rapid changes and which rewards innovation in our workforce at every rank and in every mustering.”

The new CAF then flew an exchange tour on USAF F-111Ds from 1990 to 1992, and served as executive officer of 1SQN from 1997, commanding officer of 1SQN from 2002, and as officer commanding 82WG from 2004. In 2006 AIRMSHL Davies worked as Director Combat Capability at Air Force Headquarters, before deploying to the Middle East Area of Operations to work in the Combined Air Operations Centre there. In 2008 he returned to serve as Director General Capability Planning at Air Force Headquarters before being posted as Australia’s Air Attache to Washington in 2010. He returned from the US and assumed the role of Deputy Chief of Air Force in January 2012.

AIRMSHL Davies is the latest in a line of highly regarded officers to serve as Chief of Air Force, none more so than his immediate predecessor Geoff Brown.

“I cannot leave without expressing my thanks to everyone in Air Force for the past 35 years. I have always felt fortunate to be part of the Air Force,” AIRMSHL Brown told the change of command ceremony.

“To be entrusted with the command of the Air Force is a special honour and even greater responsibility. The privilege of leading the Air Force has been immensely rewarding due to the contribution made by everyone in the Air Force,” he said.

Brown’s own contributions include the launch of Plan Jericho, overseeing the deployment of Hornet/Super Hornet, Wedgetail and KC-30 aircraft to the Middle East for combat operations over Iraq under Operation Okra, guiding through significant aircraft acquisitions including the federal government’s commitment to order 72 F-35A Joint Strike Fighters, the acquisition of EA-18G Growler electronic warfare aircraft and C-27J Spartan tactical transports as well as additional C-17 transports and KC-30 tankers, the implementation of Air Force’s ‘New Horizons’ cultural change program to develop a more inclusive, diverse workforce, and driving new investment in the Australian Air Force Cadets.

Said AIRMSHL Brown: “I leave Air Force knowing that we are on the right path for the future, and Air Force is in the capable hands of Air Marshal Davies who will continue Plan Jericho.”

An in-depth inteview with the retiring AIRMSHL Brown, given just days before he stood down as CAF, will feature in the August issue of Australian Aviation. The change of command ceremony flyover included a C-17… 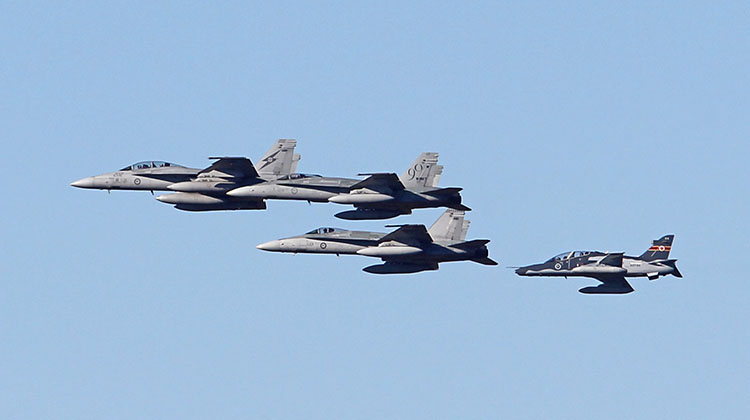 Congratulations Leo(Gavin) this position couldn’t have gone to a nicer young man, we are so proud of you , all the best Dianne and Les

Well done Leo old mate. Great to see you steering the the ship mate so to speak., regards to Rhonda and your family.