The Maritime Helicopter Support Company (MHSCo) commenced work on its support facilities for the RAN’s fleet of MH-60R Romeo combat helicopters on March 26.

In a ceremonial ‘first sod’ event held at the Albatross Aviation Technology Park near Nowra, work commenced on two new buildings which will comprise an 8,300 square metre deep maintenance workshop and hangar and a 3,100 square metre spares warehouse as part of MHSCo’s agreement to provide the Romeo fleet with through-life support (TLS) services. MHSCo is a joint venture company of Sikorsky and Lockheed Martin.

“Excavation and construction of these TLS buildings begin an important chapter for the long-term readiness of Australia’s most sophisticated maritime helicopter,” President of MHSCo, Rod Scotty said. “Our company’s experience supplying repaired parts for more than 500 US Navy H-60 maritime helicopters around the world will directly carry over to a larger business model specially-configured for Australia’s maritime helicopter needs, and carried out by skilled Australian technicians and administrators inside a modern, dedicated space.” 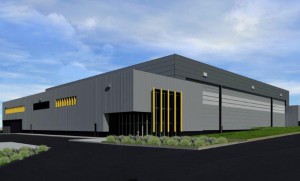 An artist’s impression of what the MRO facility will look like. (MHSCo)

Training by NUSQN725 is underway on Australia’s first four MH-60Rs at NAS Jacksonville in Florida, and the first aircraft are due to arrive in Australia by the end of the year.

Work on the facilities is being overseen by Sikorsky Helitech. The ceremonial first sod was turned by Mr Scotty, the DMO’s Head of Helicopter Systems Division RADM Tony Dalton, and by Shoalhaven City Councillor Allan Baptist.