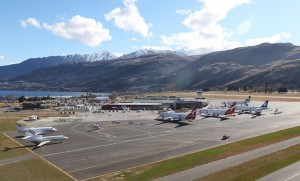 Queenstown will see a sharp increase in international and domestic services during the winter peak season. (Michael Thomas)

Air New Zealand and Virgin Australia have announced they will add an additional 40,000 seats on services to and from Queenstown over the winter peak season this year.

Running from July to September, the airlines say they will increase capacity on trans-Tasman services to Queenstown by more than 12 per cent for the period with up to five additional services by the two carriers per week between Queenstown and Brisbane, Sydney and Melbourne.

Air New Zealand will also increase domestic services to Queenstown by 11 per cent from Auckland, Wellington and Christchurch by up-gauging services to A320 equipment.