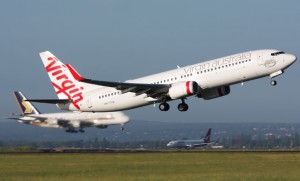 A file image of a Virgin Australia 737. (Seth Jaworski)

Virgin Australia marked the delivery of its 100th Boeing 737 by flying 100 Starlight children on a special charter on the aircraft’s first passenger flight on Monday.

“As Starlight’s official wish granting partner, we are delighted to use the arrival of our new aircraft to create a special experience for children who need it the most,” Danielle Keighery, Virgin Australian group executive of corporate communications said.