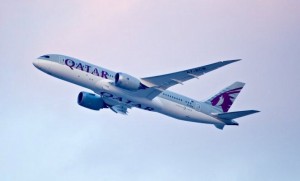 Qatar has postponed plans to inaugurate 787 services to Perth on February 1. (Mehdi Nazarinia)

As the global fleet of 50 787s remains grounded while investigations into a series of onboard incidents continue, the US National Transportation Safety Bureau (NTSB) is digging deeper into investigations that it says may be prolonged.

“This is an unprecedented event. We are very concerned. We do not expect to see fire events on board aircraft. This is a very serious air safety concern,” NTSB chairman Deborah Hersman said in a news conference on Thursday.

“It is really very hard to tell at this point how long this investigation will take. We have all hands on deck,” Hersman said. “We’re working as hard as we can to identify what the failure mode is here and what corrective actions need to be taken.”

Meanwhile Boeing reaffirmed in a statement it “welcomes the progress being made in the 787 investigation”.

“The regulatory and investigative agencies in the US and Japan have dedicated substantial resources to these investigations, and we appreciate their effort and leadership. Boeing continues to assist the NTSB and the other government agencies in the US and Japan responsible for investigating two recent 787 incidents. The company has formed teams consisting of hundreds of engineering and technical experts who are working around the clock with the sole focus of resolving the issue and returning the 787 fleet to flight status. We are working this issue tirelessly in cooperation with our customers and the appropriate regulatory and investigative authorities. The safety of passengers and crew members who fly aboard Boeing airplanes is our highest priority.

“In order to ensure the integrity of the process and in adherence to international protocols that govern safety investigations, we are not permitted to comment directly on the ongoing investigations. Boeing is eager to see both investigative groups continue their work and determine the cause of these events, and we support their thorough resolution.

“Boeing deeply regrets the impact that recent events have had on the operating schedules of our customers and their passengers.”

Meanwhile Airbus, which intends using the lithium-ion batteries that are at the centre of the NTSB investigations in its new A350, said it will use the lessons learned from the 787 to alter designs if necessary.