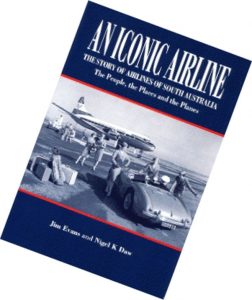 Guinea Airways, founded in Adelaide in 1927 to provide transport for remote mining operations in Papua New Guinea, was one of Australia’s early commercial aviation successes.

It moved to the Australia mainland to start flights on the Adelaide-Darwin route in 1937 and developed a network of services between Adelaide and regional centres, including Broken Hill in NSW and Mildura in Victoria.

A hostile takeover by Reg Ansett and his Ansett Transport Industries at the end of  1959 ended the Guinea Airways story and started a new one in 1960, with the renaming of the Adelaide-based operation as Airlines of South Australia.

Former ASA pilot Jim Evans and local aviation historian Nigel Daw have dredged through the records and memories of ASA personnel to produce An Iconic Airline, the story of Guinea Airways and ASA, which came to an end on June 27 1986, amid lost contracts, low growth, rising costs and tough competition from newcomers on selected routes following deregulation.

The book melds the historic facts and photographs with personal recollections of pilots and cabin crew, ground staff, even passengers, to evoke the memories of a “happy” little airline with a fleet which ranged from a rugged Junkers G31 in PNG through Lockheed Electra, DC-3 and Fokker Friendship aircraft; an airline which clearly forged a special place in its region, and in the hearts of its people.

An Iconic Airline, by Jim Evans and Nigel Daw, self-published. $39.95 through www.airlinesofsa.com