The load for the test flight from at Edwards Air Force Base in California included a pair of air-to-air AIM-9X missiles mounted on outboard wing stations of an F-35A, in addition to two 2000lb guided bombs and two medium range AIM-120 air-to-air missiles, according to F-35 maker Lockheed Martin. No weapons were fired during the mission.

The F-35A is designed to carry up to 8170kg  on 10 weapon stations, including four stations in a pair of internal weapons bays designed to maximise stealth. 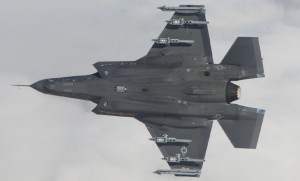