The federal government has confirmed it has requested pricing and availability of 10 Alenia C-27J tactical transport aircraft for the RAAF.

The Air 8000 Phase 2 Battlefield Airlifter (BFA) project aims to replace the tactical airlift capability left vacant by the retirement of the RAAF’s DHC Caribou in December 2009, and has been put off by successive governments over a period of more than 20 years.

The C-130H and C-130J Hercules operated by Richmond based 37SQN have to some extent fulfilled this role in recent years, but the Hercules lacks the short field performance and is much heavier than the Caribou or its possible replacements, while helicopters lack the range or speed of a fixed wing aircraft.

In a statement released on October 19, Minister for Defence Stephen Smith and Defence Materiel Minister Jason Clare said the formal request was being sent now because production of 38 C-27Js for the US Air National Guard was coming to an end. “Due to the pending closure of the production line for US Air National Guard aircraft the Government has authorised Defence to issue a non-binding/no-commitment Letter of Request seeking price and availability information on the C-27J,” the statement reads.

While Defence was unable to confirm at time of writing to which organisation the request had been submitted, the ministerial statement suggests the C-27J may be acquired through the US Foreign Military Sales process. This would give Australia an opportunity to tie into the US’s sustainment and upgrade program for its fleet, as well as giving greater economies of scale for both operators.

Recent media reports suggest US politicians are pushing for an increase in the US ANG fleet to as many as 75 C-27Js, as the type is now in operation in Afghanistan and has proven to be far more economical than the larger C-130 with typical loads. The C-27J shares common engines and cockpit avionics architecture with the C-130J.

The formal request doesn’t mean the C-27J has been selected to fulfil the Air 8000 Phase requirement over Airbus’s rival C295. “The information from the Letter of Request will inform Government consideration of capability, cost and schedule issues associated with this project as well as consideration of the acquisition strategy, including whether a roader tender process will be pursued,” the ministerial statement said.

But the RAAF is known to have long favoured the more rugged structure and larger cargo hold of the C-27J over the smaller but longer C295, and is likely to push for a sole-source selection. The statement says it expects a response to the request by February 2012, after which “careful consideration of all the options will then proceed.”

The statement has also for the first time officially acknowledged that Defence is developing options to retain the C-130H fleet – of which about eight aircraft are operational out of a core fleet of 12 – beyond its planned retirement in 2013 out to 2016.

UPDATE 3.11pm 19/10/11: Defence has confirmed that Australia’s letter of request for 10 C-27Js was submitted to the US Government, which means it would likely be an FMS sale through the US Air Force. 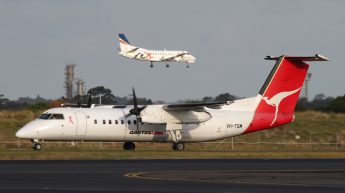