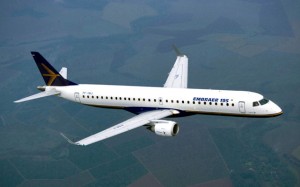 Embraer has released its commercial and executive aircraft delivery figures for the second quarter of 2011.

A total of 25 commercial and 23 executive jet deliveries were made in Q2, with the Embraer 190 and Phenom series of aircraft leading their respective categories. For the company’s commercial division, a total of 17 E-190s, five E-195s, two ERJ-145s and one E-175 were delivered in Q2. Meanwhile, 10 Phenom 100s, 10 Phenom 300s and three Legacy 600/650 jets were delivered by the company’s executive aviation division.