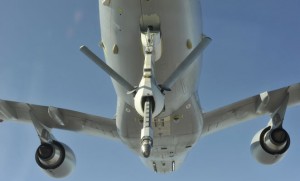 Two of the RAAF’s long-delayed Airbus A330 MRTT KC-30A Tankers could be making their way to Australia in June following Airbus Military’s recent approval of a safety modification to the first aircraft’s fly-by-wire refuelling boom.

The RAAF’s first A330 MRTT is currently having its flight test instrumentation removed and is undergoing a major service at Spain’s Iberia Maintenance, and will receive a new air refuelling boom system installed following the loss of the first boom when it sperated from the aircraft after a refuelling incident with Portuguese F-16s in January. Reportedly among the modifications will be a new human/machine interface (HMI) system which adds a new ‘stick-shaker’ function for the boom operator’s controls, although Australian Aviation understands that further design revisions of the HMI will be required before the RAAF accepts the boom into service. In the interim, the KC-30A’s wingtip pod refualling and cargo/passenger capabilities are more urgently required by the RAAF.

Having completed work on the RAAF’s third tanker last year, Qantas Defence Services (QDS) is currently undertaking conversion work on the fourth KC-30A in Brisbane before it is flown back to Spain in August for flight testing by Airbus. Aircraft five is due to ferry to Australia from Getafe soon and is expected to begin conversion by January 2012.

Meanwhile, the second and third KC-30As which will be the first two aircraft to enter service, are awaiting acceptance by the RAAF at the company’s Getafe site near Madrid in Spain, where Airbus is currently in negotiations with the Defence Materiel Organisation (DMO) for a commercial handover of the RAAF’s five KC-30As. Once that is finalised, Airbus predicts the RAAF could receive four of its five KC-30As this year, with the last aircraft following in 2012.

Still to be decided is where and when the aircraft’s Large Aircraft Infrared Countermeasures (LAIRCM) systems will be installed and flight testing of the systems will be conducted, as the US has withdrawn Airbus Military’s export licence to do the installation work.

The KC-30A program is almost 30 months delayed from its planned February 2009 first delivery to 33SQN at Amberley, and the RAAF has been forced to charter commercial Omega Air 707 and KDC-10 tankers in the interim since its own 707s were retired in June 2008.