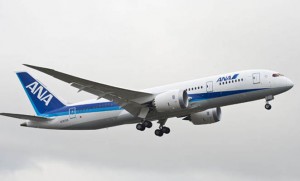 Japanese carrier All Nippon Airways (ANA) will partner with Boeing to begin preparing for commercial operations with their 787 Dreamliner fleet, with the start of simulated in-service flights across several airports in Japan for service ready operational validation (SROV) on the aircraft later this year.

The week long SROV process will see the 787 make its first appearance in Japan, with a number of scheduled in-service operations to several airports throughout the country from July 4. SROV flights will include trips between Tokyo’s Haneda Airport, as well as Osaka (Itami and Kansai), Okayama and Hiroshima. While in Japan, ANA ground crews will also practice maintenance and servicing of the 787 during SROV, including fit checks of airplane jacks and maintenance hangar stands, towing and refuelling the airplane, and various other routine maintenance tasks.

“ANA is eager to introduce the innovative 787 Dreamliner to Japan. Giving our employees the opportunity to gain experience with the airplane will help ensure a smoother entry into service later this year,” ANA president and CEO, Shinichiro Ito said in a statement.

Boeing 787 program vice president and general manager, Scott Fancher said the aircraft had already been put through a “rigorous flight test program”, with the company eager to “prove its capabilities and reliability in a revenue-like environment.”

Launch customer ANA currently has 55 Dreamliners on order, with Boeing expecting to deliver the first aircraft during the August-September timeframe. The recent development follows ANA’s decision to send 10 of its pilots to begin 787 training at Boeing Flight Service’s Seattle campus in April.