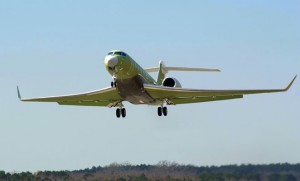 Gulfstream’s fifth and final Gulfstream G650 flight test aircraft took to the skies on January 24, conducting a test flight for 2 hours and 46 minutes.

The G650 (S/N 6005) took off from the Savannah/Hilton Head International Airport at 12:07 pm local time with experimental test pilots Bill Dobbs and Al Moros at the controls and flight test engineers Heather Burke and Nathaniel Rutland in the cabin. The crew evaluated the aircraft’s avionics, flight control systems and handling qualities. A maximum speed of Mach 0.94 and an altitude of 51,000ft was reached, before landing at 2:53pm local time.

Gulfstream senior vice president, programs, engineering and test, Pres Henne, labelled the flight as “a significant milestone in the overall certification program”, with aircraft testing “moving along at a brisk pace”.  “We’ve had four aircraft flying for some time now, so we’ve already accomplished a broad range of tests. In addition, the fatigue test article has moved to the structural-test hangar, where it will be used to evaluate the lifelong structural integrity of the aircraft,” Henne said.

Before its first flight, S/N 6005 also underwent certification ground tests for lightning and high-intensity radiated fields (HIRF) at Gulfstream’s headquarters in Savannah throughout November and December. Gulfstream reports that the lightning tests indicate the airframe and systems can withstand a severe lightning strike, while HIRF testing demonstrates the ability of the aircraft’s flight-essential systems to withstand external radio frequencies without interference.

To date, all five G650 aircraft have now surpassed 1100 hours in their flight test program and are on schedule for certification in 2011 and first deliveries in 2012.