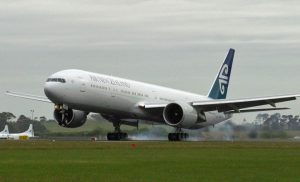 Air New Zealand’s first Boeing 777-300ER touched down at Auckland on December 24 at the end of its delivery flight from Seattle, bringing with it the airline’s much vaunted new interior, including its ‘cuddle couch’ economy ‘Skycouch’.

“Four long years of planning and design to create an absolute world first interior and passenger experience is now a reality.”

The aircraft, ZK-OKM, is the first of five 777-300ERs Air New Zealand has on order, with the second due for delivery in February and the third in April. They are introducing a 338-seat interior featuring 244 in economy (with 60 centre seats able to convert into 20 Skycouch combinations), 50 premium economy seats and 44 business class Business Premier seats.

Outgoing Air New Zealand group general manager Ed Sims said the catalyst for developing the new interior was the fact that the majority of the airline’s long faul flights operate overnight, and that its flights are 90 minutes longer compared to the world airline average.

“That’s why we set out to overcome the seemingly impossible challenge of finding a way for people to lie down in economy without compromising affordability,” Sims, who was finishing up with the airline on December 23, said. 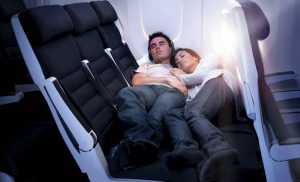 “Few airlines have invested time and money beyond first class, whereas we have focused on the areas where most of our passengers sit by reinventing every aspect of our economy and premium economy customer experience.

“We’ve created the world’s first economy seating that enables people to lie down and a premium economy seat that many airlines would call business class,” said Sims.

“We’re also the first commercial airline to introduce induction ovens for all cabins to give our customers freshly prepared food and have developed an inflight entertainment system to give people greater control over the way their journey will unfold.”

Air New Zealand says more than 30 airlines have contacted it expressing interest in licensing its seat technology, which the kiwi flag carrier is keeping for its own exclusive use for an 18 month period. Passengers won’t be able to use the Skycouch until it receives NZ CAA certification in coming months.