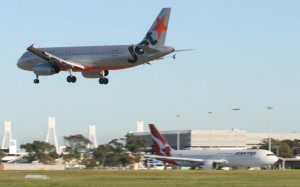 Jetstar has announced that it will increase capacity on services from Melbourne and Sydney to Hobart from December by over 30 per cent.

The airline will add a daily frequency to its Sydney-Hobart and Melbourne-Hobart services from December 6, taking it to three and five times daily respectively. The new services will put an additional 128,000 seats to the Tasmanian capital over the holiday season.

“With the introduction of these new services we will now offer more than 1.6 million seats to and from Tasmania each year, representing our most significant capacity increase here since launching in 2004,” said Jetstar group CEO Bruce Buchanan.

The increased frequencies to Hobart comes after Jetstar announced in July that it will add significant capacity to Launceston from December 2. The announcement also came after Tiger Airways suspended its services there in early August.