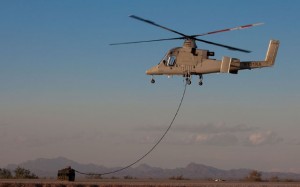 Lockheed Martin and Kaman have successfully demonstrated an unmanned variant of Kaman’s K-Max helicopter to the US Marine Corps for its unmanned cargo helicopter requirement.

The K-Max, fitted with both autonomous, and line-of-sight and datalink remote control, systems, flew a series of demonstration flights at the US Army’s Dugway proving ground in Utah in late January.

“The system performed a rigorous set of cargo resupply scenarios as programmed, allowing the ground based operator to monitor progress, and make adjustments to aircraft positioning only when requested by the Marine Corps for demonstration purposes,” said Lockheed Martin’s Mission Systems & Sensors vice president, Dan Spoor. “We met or exceeded the requirements within the scheduled three day timeframe of the demonstration.”

The demonstration required the aircraft to hover at 12,000ft with a 700kg sling load, and to deliver 1450kg of cargo to a forward operating base 150nm away in a six hour timeframe.