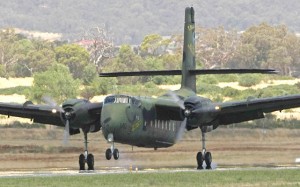 A4-140 'Bronco 1' touches down at Canberra at the end of the last RAAF Caribou flight. (Paul Sadler)

The RAAF ceased all DHC-4 Caribou operations today (November 27) with the delivery of the final aircraft, A4-140, to Canberra, where it was handed over to the Australian War Memorial. The final flight follows the delivery of another Caribou to the RAAF Museum at Point Cook on November 26, and the relocation of the remaining aircraft to Oakey to await disposal.

“This aircraft has served in Vietnam, supported United Nations efforts in Kashmir, and has seen extensive service in South East Asia and across the South Pacific,” Minister for Defence Personnel, Materiel and Science, Greg Combet said. “Australia’s Caribou have had an illustrious career over the last 45 years, and their record is a testament to all who worked on and flew the aircraft.”

A4-140 was the Air Force’s oldest surviving Caribou, accumulating over 20,000 flight hours, and was one of the initial three delivered to Australia in April 1964. For its last flight the Vietnam War veteran was flown to Canberra from RAAF Richmond piloted by 38SQN Commanding Officer WGCDR Tony Thorpe and FLGOFF Matt Sullivan, with flight engineer SGT Scott Jones. It was greeted in Canberra by Chief of Air Force AIRMSHL Mark Binskin and Commander Air Lift Group AIRCDRE John Oddie. Over a period of about six months A4-140 will be disassembled in the Qantas Defence Services hangar at Canberra Airport before being trucked to the Australian War Memorial’s storage and preservation annex in the Canberra industrial suburb of Mitchell. It is likely to be some years before the aircraft, or sections of it, can go on display at the Memorial itself. Qantas has donated use of the hangar for the disassembly.

The Caribous are being temporarily replaced by three former Army and five new King Air 350s as 38SQN transitions from the piston engined, ‘steam gauge’ cockpit Caribou to its eventual turbine powered modern replacement next decade. The three Army King Airs were transferred from Army’s 173SQN to 38SQN at Townsville earlier this week, and will be joined by the five new aircraft next year.