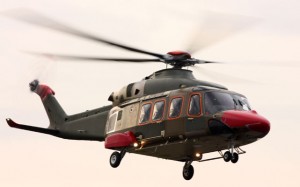 The AgustaWestland AW149 multirole military variant of the AW139 medium twin helicopter completed its first flight on November 13, a day after the AW159 Lynx Wildcat updated Lynx for the British military flew.

The AW149’s 20 minute flight, from AgustaWestland’s Vergiate plant in northern Italy, was captained by AgustaWestland chief test pilot Giuseppe Lo Coco, and included an assessment of the helicopter’s general handling and basic systems. A second AW149 prototype, with production standard 2000shp class GE CT7-2E1 turbines with FADEC and an all new transmission system, will fly in 2010.

IOC for the AW149, which can seat up to 18 troops and has been developed for an Italian air force SAR requirement, is slated for 2014.

The AW159, an advanced development of the Lynx, performed basic handling checks during its flight from Yeovil in the UK.

The aircraft features two Honeywell/Rolls-Royce LHTEC CTS800-4N engines, a composite faceted airframe structure, and new avionics and weapons systems. The first aircraft is due to enter service in 2014.

The British Army has ordered 34 AW159s and the Royal Navy 28, while AgustaWestland believes there are sales opportunities for the aircraft in the Middle East and Africa.