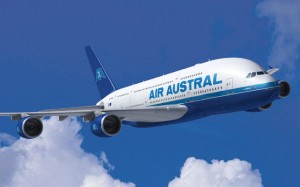 Air Austral, based on the French Indian Ocean island territory of La Reunion, has become the latest customer for the Airbus A380, with confirmation of its firm order for two announced on November 17 at the Dubai Airshow.

The Engine Alliance GP7200 powered A380s will be configured in a single class, 840-seat configuration and will operate between La Reunion and Paris when delivered in 2014. Air Austral had previously signed an MoU for the two A380s in January.

“Air Austral opens a new chapter for A380 operations. It will operate the A380 with the lowest fuel cost and emissions per passenger of any aircraft available today,” said John Leahy, Airbus chief operating officer – customers. Airbus says that in the Air Austral high density configuration, “fuel consumption levels below two litres per passenger per 100 kilometres can be expected”.