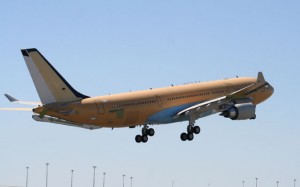 The RAAF’s second A330 based KC-30A tanker flew for the first time following its conversion to tanker configuration by Qantas Defence Services (QDS) at Brisbane last Thursday.

The aircraft, the first of four to be modified to tanker standard by QDS, made the flight after performing a rejected takeoff and check at Brisbane. It was to have performed a couple of flybys of its eventual home base of RAAF Amberley near Ipswich but had to return to Brisbane earlier than scheduled due to a minor glitch.

Subsequent flights on Friday and over the weekend have helped to prepare the aircraft for its flight to Getafe near Madrid in Spain where it will join the first aircraft in completing the KC-30A’s trials and certification work before being delivered to the RAAF next June.